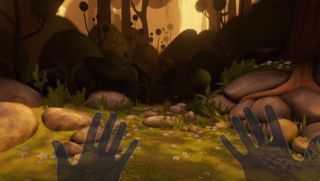 In what could ultimately prove to be a game changing feature for VR, the Oculus Quest will soon support hand tracking. As in, very soon—initially announced for an early 2020 debut, Oculus today announced it will be pushing the feature live this week with its Quest v12 software update.

Hand tracking enables users to manipulate a VR environment without a controller, for a more immersive experience. How well it actually works will dictate how much of a boon this is, but it's potentially a big deal.

"In this initial release, you can use your hands to navigate and interact within Quest’s Home interfaces like Library and Store, plus in select first-party apps like the Oculus Browser and Oculus TV. You can even set your floor height for a stationary Guardian boundary using your hands—no controller necessary," Oculus says.

While the experience will be somewhat limited in the early going, Oculus is releasing a new software development kit (SDK) next week that will enable developers and creators to build their own hands-free interactions.

This capability began as a research project at Facebook Reality Labs. Oculus had previously said it is using deep learning to understand the position of a user's hands and fingers, as tracked by the Quest's onboard cameras, which is then translated into VR.

"Our computer vision team developed a new method of using deep learning to understand the position of your fingers using just the monochrome cameras on Quest today—no active depth-sensing cameras, additional sensors, or extra processors required. This technology approximates the shape of your hand and creates a set of 3D points to accurately represent your hand and finger movement in VR," Oculus explained at Oculus Connect last September.

While hand tracking should lead to a deeper level of immersion, Oculus also hopes it will make VR more approachable for newcomers, by removing the need to learn controller functions. That's probably lower on the list of barriers for VR, but hey, every little bit helps.

As for third-party experiences that leverage hand tracking, Oculus says it expects those will start to arrive next year.