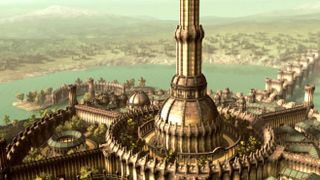 Oblivion was my first Elder Scrolls game (I'd briefly tried to play Morrowind on the Xbox but it just didn't take), and I didn't know much of anything about the series before I started playing. Most importantly, it never occurred to me that the Elder Scrolls were actually a thing. It just seemed like a good name for a fantasy game. Elder gods, old paper, yada yada. I get it. So there I was, deeply absorbed in Oblivion and taking orders directly from the Gray Fox, the mysterious leader of the Thieves Guild, when I'm told I need to steal a damn Elder Scroll. From the Imperial Palace. It's that moment when a character in a movie says the title, except instead of groaning (The World is Not Enough) I was full-on, hell yeah into it (Snakes on a Plane). It's really all in the execution.

It felt like I was about to steal the original Ten Commandments tablets or something, a holy object I had previously assumed was pure allegory. The timing was also perfect. This was my first guild, I was still fairly low-level, and the stakes of this mission conveyed that anything-is-possible sensation we're always chasing in new, still-mysterious game worlds when we haven't found the edges of what you can do. And it was intense as hell, because the Imperial guards could still absolutely wreck me if I got caught.

The thing that really cemented it for me was that I did get caught—or, rather, spotted, which meant I was running in terror from a small army of Imperial guards, the most treasured relic of the Empire tucked away in my inventory. I couldn't stop moving or I was dead. Somehow I made it to the secret chute in the fireplace and survived the massive fall with the special boots I was given for just this occasion. I made it!

There are many ways that mission can go, and it won't impress as much if you can sneak past the guards with ease or survive a huge fall with a shrug. But if you do it early in the game, by the skin of your teeth, it's a thrilling heist and one of Oblivion's most memorable moments.