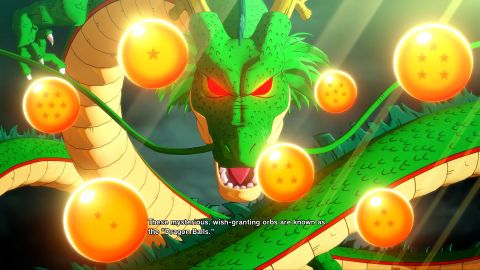 A light and fun RPG that sometimes gets bogged down by its interweaving progression systems.

When the Dragon Ball Z anime aired, the first arc lasted thirty-nine episodes. Assuming every episode is around 22 minutes (not including commercials), that’s about 14-and-a-half hours until Vegeta is defeated. Dragon Ball Z: Kai cuts this down to 26 episodes, totaling to nine-and-a-half hours viewing time.

In Dragon Ball Z: Kakarot, you’re able to get through this first arc, including all the sub-stories, in about six hours. The year spent training is sped up, giving you snippets of Gohan’s transformation and Goku’s training in the afterlife without forcing you to defeat X number of creatures. Kakarot as a game understands what you’re here for—larger than life, planet-destroying battles. It offers plenty of those, while integrating RPG elements to give you a sense of growth and progress.

Dragon Ball Z: Kakarot covers the four main arcs of the story—Saiyan, Frieza, Cell, and Buu—but manages to cut out even more of the fluff that Kai does. As a result, you still get all the main story beats, but you also don’t need to watch battles that take multiple episodes to complete. Instead, you fight in the battles yourself.

Battles are similar to those in Dragon Ball Xenoverse, but simplified a bit. The system requires you to start with basic Ki strikes and punches. Then you launch powerful skills when the opportunity appears.

While the battles feel epic, they are ultimately very simple. You get in close, land a basic combo, and follow up with a special attack. Sometimes you may need to use a healing item, but you can finish most battles without issue. The battles do make you feel like you're an amazingly strong Z fighter, but sometimes they lack tension.

To stop you landing combos too easily, the game gives bosses counterattacks and occasionally armour. It doesn’t feel great when you start to land a close-combat combo only for an enemy to stop being stunned and launch a counterattack out of nowhere—especially when the attacks launch you so far away you have to spend ten seconds or so getting back into the fray.

Kakarot provides an open world to explore, and all sorts of things to collect, but you never feel forced to run around and do anything other than the next main story beat. If you so choose, you can spend hours fishing, collecting materials, and flying through the air collecting Z Orbs. If you don’t want to deal with any of that, though, you can just move on and come back later. Sub-stories, the side quests of Kakarot, do appear to expire after some time, but you can return to various time periods after completing the game.

That freedom is one of Kakarot’s strengths. Main characters will often get a lot of experience as a part of the story, making sure you’re not underpowered for the fights ahead. You’ll also complete a lot of the Turtle School Training tasks just by going through the motions, and they will provide enough healing items to power through some of the tougher story battles. There’s no need to grind, no need to worry about finding materials to craft the perfect meal, no need to complete every sub-story. The choice is there to do all that if you want.

Some systems feel like a burden, however. The Community Board is the main draw of Kakarot, but the benefits you get from collecting and leveling up Soul Emblems aren’t quite worth the effort. Given that the main draw of doing sub-stories is to get extra Soul Emblems, it ruins the motivation to go and do anything outside of the main story.

There are skills to level up, but sometimes you need to train before you can spend Orbs on your skill tree. Meals give you both permanent and temporary effects, but you can also get Chi-Chi to make full course meals with even more benefit—if you can find the recipe first. You need to turn in Turtle School tasks by talking to Master Roshi, but you can’t do that very often during the course of the story. Collecting the Dragon Balls later seems cool, and in theme with the show, but ultimately the rewards aren’t worth the effort.

It's just enough to weigh you down, particularly if you’re just trying to complete some basic tasks. Since everything is dumped into tutorials in the beginning, for a while I forgot that there were skill trees to level up. It’s hidden away under a few menus, and it wasn’t until I was determined to figure out the use of all the Z Orbs I was picking up. There’s just too much going on under the hood of Kakarot, and it’s too easy to simply not understand everything the game is throwing at you.

In terms of performance, I found that Kakarot played well on my rig. There was a lot of screen tearing in the movie cutscenes when I first began the game, but once I turned on V-sync the problem went away. Other than a few FPS drops while flying around the overworld map, the experience was pretty smooth. There was no noticeable slowdown in battles, which is the most important time for solid FPS, so it played pretty well overall.

A light and fun RPG that sometimes gets bogged down by its interweaving progression systems.