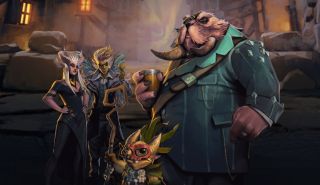 Dota Underlords, Valve's Early Access auto battler, has shed most of its players in the six months since it launched on Steam. In June, it peaked with more than 200,000 people playing concurrently, according to Steam Charts, but in the last day it's had fewer than 15,000.

Spotted by Reddit user SharkyIzrod, the average player number has dwindled to just over 11,000, with peak players below 20,000. When Underlords launched, auto battlers seemed like the thing to watch, but interest in the genre as a whole seems to have sunk considerably since.

It calls to mind Artifact's troubles, unfortunately, which Valve ended up pausing and now averages around 100 players. In that case, however, the exodus was more immediate and severe, and Underlords isn't quite there yet—the player count hasn't settled, though.

Riot's auto battler bid, Teamfight Tactics, seemed to be doing a lot better the last time the company announced figures. In September, it apparently had a monthly player base of 33 million. It seems here to stay, then, but the future of the genre itself seems a lot less certain.