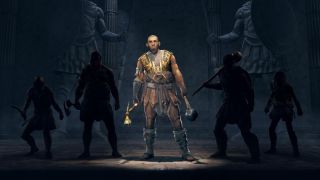 Oh, Ubisoft. If you're going to go there, you might as well go the whole hog.

The latest mercenary to appear in Assassin's Creed Odyssey is Testiklos the Nut. As well as his unfortunate name, he's laden with a tragic past. OK, it's not a tear jerker, but I guess it's a bit sad. He misses his brother, you see. Testikles (who you might've met previously in the game). They were separated when they were young, and Testiklos hasn't been the same since.

Having been separated quite early in his life from his half-brother Testikles, his mood has been unstable ever since. He never felt as secure than with his own kin, so he deals with the separation by breaking things.Testiklos the Nut is now available in #AssassinsCreedOdyssey! pic.twitter.com/vHgNKITFrUApril 30, 2019

Someone's already hunted him down and killed the poor guy and his pet boar. Yes, he's an animal lover. See, there's more to him than just a silly name. He's got lots of things going for him.

You can fight and recruit Testiklos the Nut now.

Update: we added a quick edit here to reference the fact Testikles had previously appeared in Assassin's Creed Odyssey.