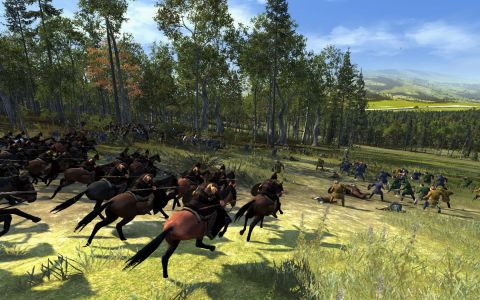 A barbarous twist on Rome II, with a handful of fixes.

We are old friends, Total War and I. It’s seen me through my entire adult life and has outlasted most of my significant relationships. We don’t hang out that much—maybe a fortnight every year—but it’s always quality time. Despite looking a bit more fancy as time’s gone by and always turning up in fresh duds, it’s the same old complex, plodding game really, banging on about history whilst trying to hide its disturbing interest in the bloody bits. Total War’s latest garb is Attila, the height of fash-hun.

Attila might not appear to be that different to Rome II, but it’s a somewhat structurally different game, most noticeably in the asymmetry of the factions. Factions in the previous game had different units, buildings and appearances, but they all followed the basic civilized elements—they used their provinces for farming, their cities for manufacture, and they didn't attack each other on sight.

By contrast, Attila and his Huns do really embody Total War, in the original meaning from Clausewitz—to mean nothing was civilian, everything was a military target. For Attila, the wealth of a city, the lives of its people, even the fertile land they rode through, were all tools for the huns to accrue more riches. Playing as them, their inability to fortify or settle or ambush, and their bonuses from razing and being at war, mean constant battle is pretty much their experience.

The majority of the other barbarous factions are similarly brutal. Driven by climate change (which gradually reduces fertility in the Northern provinces as they freeze), the huge hunter-gatherer populations of the nomadic tribes can’t live off their traditional lands any more and forced to move south, displacing those before them. Much like the English will all move to Scotland when the ice caps melt and London drowns.

Spread over a slightly extended map, most of these barbarian factions can also form hordes in times of need. Four of them start that way, including the comically named Alans. These four nomadic tribes get huge growth bonuses from settling and uprooting - which would be a fine tactic, if you didn’t lose all your building and camp improvements every time. The more stable Franks and Saxons, by contrast, get bonuses to converting other people’s buildings, meaning they’re excellent conquerors of collapsing Rome.

Of course, there are the three remaining ‘civilised’ Empires. The Western Roman Empire is massively wealthy at the game’s start, but with few armies or military buildings, which makes it impossible to defend. The Eastern is rich and aggressive, but surrounded on all sides by enemies. And the Sassanids are strong and really only under threat from the Huns and the Eastern Romans. And that’s it—a small number of factions for a Total War game, despite the number in-game, which makes me suspect they’ll all unlock as DLC as time goes by.

Thematically, the game reflects the era well. Playing it, it’s striking how often cities get razed, and the way the map changes from stability and richness to poverty and desolation. Especially as the game goes on, and you start exploring properly, and you find whole swathes of the map that are burning, depopulated rubble and soot. The Huns historically really did this, and the other hordes did to a lesser extent.

Attila himself does feature in the game, especially playing as the Huns. Though much of the family structure, dilemmas and events are randomised, certain events always seem to happen. Attila’s predecessor, Uldin, always seems to go blind, and Attila always survives to adulthood. As you go along, the game reveals more of his story through cutscenes, trying to build up a theme of him being the doom of the world. It’s a much more in-game representation of history than Napoleon Total War, though I lament the loss of that game’s more structured narrative.

Attila mostly runs as smoothly as a Hunnish horse. Yet, though battles and the main map are often solid (and indeed beautiful, if you turn all the HUD off with ‘k’) as soon as it gets to the end of turn phase, the game chugs badly as it simulates the AI turns, with the framerate dropping from high 40s straight to 0. This has been a problem with Total War for years and one which only seems to be getting worse - we suspect its core to the engine and insoluble.

It’s worth pausing on the factional politics. Though I never had a factional event go badly wrong, the new family system (which borrows heavily from Crusader Kings) adds welcome complexity to the game, so much so that it’s hard that it’s not always been there. Though it’s much easier to manager than CKII’s equivalent, there are perhaps not enough tools to manage your powerbase—I found myself in absolute rule of the Huns almost by accident, which increased my army integrity and tax rate but heavily reduced growth in the horde. If I could have done, I would have reduced my domination, to trade money for growth.

What happens beyond Attila’s childhood is a mystery to me, because the game is so damn hard. I’ve restarted over and over, loaded save games galore, only to find myself butting up against the same tough factions. I’m finding it impossible to keep any of the horde capable factions alive as a horde, rather than as a traditional static faction.

Part of the difficulty must be because playing a horde is relatively tough. Horse archers are totally unsuited to protracted sieges. For a siege you need towers, rams, ladders and so on, which requires infantry slowly moving them to the walls. But the great advantage of the Huns are their cavalry, which are useless in breaching walls, but amazing in on-the-field battles. Indeed, an army of horse archers firing flaming arrows is a delight to watch, if you’re not on the receiving end—though I played most battles entirely in slow-mo, as the Hun’s horsemen are just too fast to manage otherwise.

(On which note, it’s worth mentioning that Creative seem to finally have got to grips with the persistent problems with sieges, where units had trouble moving from one flat surface to another. Similarly, the disembarking problems for ships seem to have been fixed. I even had fun watching marines leaping between ships like monkeys, and though sea battles are still messy, they definitely work.)

The barbarians also have all their heads in one basket. Each horde is both your city and your army, comprising a huge mass of tents with specialist functions, as well an army that has the same levelling up abilities as a normal Total War army. And those tents get damaged easily in battle, which means costly repairs are common. You end up sending your hordes around in groups of two or three, as losing one is such a huge blow.

To me, many of the horde mechanics don’t make sense. If you have a general’s unit on its own in a horde (as you always will when you create a new one at great expense) and that general gets killed or wounded, not only will his bodyguard disappear, but so will the horde. Similarly, when you finally settle your horde down somewhere, you get access to any pre-existing buildings, which you can convert—or you can settle a razed region at great expense. But you also lose all the tents and their bonuses, completely. The first time I settled my Ostrogoths, they almost went bankrupt, because we’d dispensed with of all the money making apparatus. If you go back to being a horde, your have to start from scratch again.

And hordes are hard to create! Each existing horde generates growth from a combination of food and tent industries, which is used (alongside piles of money) to make new tent industries. To build a new horde or rebuild a wiped-out one, therefore, is to forgo building for many turns. Considering you can only grow, or build, or recruit units, when you’re encamped that means hordes spend a surprising amount of time just sitting around.

Here, mid-game, waiting for my horde to grow, I happened across an AI faction that had three max-level scouts/spies, who proceeded to assassinate my generals and disrupt my horde, for turn after turn, which I was impotent to prevent. Since Shogun I, Creative has been struggling to balance agents. And I wonder if that’s an AI problem, again. The campaign AI has always been the series’ weakest aspect and, while it generally behaves itself in your presence, I kept seeing strange things in the middle distance. Factions armies running around in circles for years. A collection of the most powerful armies in the world, all standing in a cluster, all with the stakes up that indicate fortification and lock down nearby movement. The armies of Eastern Rome, along with every enemy army, pursuing my Huns literally across the entire European map, whilst their home provinces burned.

Finally, I read an entire book whilst reviewing this game, because of the time it takes for the AI to act. It’s especially slow when something gets razed, and the entire amazing ‘region burning’ animation happens off-screen or when it gets to the Western Roman Empire which is so huge my framerate drops to zero. Some of these are teething problems—the sort of things that get fixed in day one patches—others may take more work, and others Creative have known all about for a while and not fixed.

Like Rome II, the game also has multiplayer battles and a campaign mode run on the same European map as the singleplayer. The netcode worked perfectly well when I tried it, though text chat was quite laggy. If you’re going to play this as one of the huge Roman Empires, make sure the turn timer is set long. I was also able to test the Historical Battles, which follow the main theme of Rome II’s, and are perfectly reliable and fun—if again, too tough for me.

Overall, Attila carries its theme well, and introduces new game mechanics that improve the core of Rome II. It’s as beautiful as Rome, has the same stunning music, animation, and sound effects, with much improved character and army management. The Total War games still need work to reach that perfection they’re aiming for, and the bugs this close to release are worrying, but Attila shows that Creative have been listening.

Pikes never go out of fashion.

Dilemmas sometimes allow you to blind or castrate your own characters. Ouch.

I never tire of seeing Constantiople.

The boy stood on the burning deck…but not for very long.

No, I don’t know why all the armies in the world are standing in one remote spot near Sirmium. Cottaging, perhaps.

A barbarous twist on Rome II, with a handful of fixes.