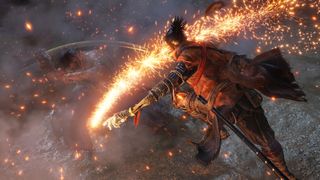 There was plenty of capital-D discourse about the fixed difficulty level in Sekiro: Shadows Die Twice when the game came out. For instance, Tom Senior had some choice words for the Guardian Ape. Like all FromSoft games, it's what you might call a bit of a challenge, even with a few allowances to modern game design thrown into the mix. Now there's a new mod that scales that difficulty back a bit.

This one, called Sekiro the Easy, makes some key changes to the game's mechanics so "you can play the Sekiro happily," according to modder Tender Box. In addition to buffing player attack power, defense strength, and stamina, Sekiro the Easy also gives you infinite Spirit Emblems, which allows you to use your Shinobi Prosthetic abilities as often as you want. It also removes the time limit on the Puppeteer Ninjutsu, meaning you can take control of an enemy and then conceivably take a nap.

It's not the first Sekiro mod that changes up the difficulty. An early mod let you adjust enemy speeds, for instance. And of course someone has already modded in Thomas the Tank Engine, replacing the Great Serpent.

Sekiro the Easy is available over at Nexus Mods. Thanks, Twisted Voxel.