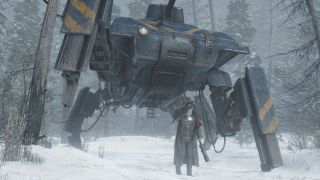 Iron Harvest was recently successfully Kickstarted to the tune of $1.2 million. It's a real-time strategy game set in the steampunk 1920+ universe, where World War 1 soldiers fight in the shadow of juddering mechs. The early screens and footage look promising, so I sent King Art Games a few questions to learn more about their plans for the game's three factions and their many war machines.

PC Gamer: Congratulations on your Kickstarter success, were you surprised by the backing you received?

Julian Strzoda: We were hopeful, because we knew there is a lot of interest in Iron Harvest, but on the other hand, we asked for a lot of money, and Kickstarter isn’t as big as it used to be when it comes to videogames. In the end we made more money with the Iron Harvest Kickstarter campaign than with our previous three campaigns combined. That’s certainly a welcome surprise.

You mention on your site that you asked thousands of RTS fans what they want from a new RTS game. Was it a survey? What did you learn?

We played a ton of classic RTS games in preparation for the Iron Harvest development and came up with a basic plan on what we think an RTS should focus on these days. But we were unsure if we were on the right track, so we conducted a survey. Over 15k RTS fans answered and they confirmed most of our ideas. One of the more interesting findings was that almost two thirds of the people who took the survey prefer singleplayer and/or coop gameplay over competitive multiplayer. That was good news for us, because we, too, felt that it had been a long time since the last really great singleplayer RTS campaign.

We saw the artworks of Polish artist Jakub Rozalski a couple of years ago. The combination of early 20th century landscapes and lifestyle mixed with giant mechs was fascinating to us. We liked the idea of a World-War-1-like setting, but with freedom to do crazy stuff when it comes to units and story, since it’s an alternate reality. We have all seen mechs in futuristic settings, but experiencing the birth of these machines—crude, brutal technology in a world at the brink of discovery of so many things we take for granted today—feels refreshingly unique. In the end… it’s giant diesel-punk mechs fighting and destroying everything around them… how could you NOT make a game out of that?

I'm reminded of Company of Heroes in the footage released so far. Have any games specifically influenced the design of Iron Harvest?

Company of Heroes is one of the big inspirations when it comes to certain gameplay aspects and the overall “feel”. Our campaign structure is inspired by Warcraft 3, where there are multiple campaigns for multiple factions, held together by an overarching narrative. Other inspirations were StartCraft 1+2, Dawn of War 1+2, some of the Command & Conquer games and many other RTSes. When it comes to controls and UI, we try to stick with genre standards instead of reinventing the wheel.

Basically, we take everything that we feel worked well in other games, come up with solutions for things that didn’t, and mix all of that with our own ideas. We’re after an RTS evolution, not a revolution.

How will the three factions differ from one another on the battlefield, in terms of units and playstyle?

Each faction plays differently in Iron Harvest. For example, Polania units are generally lighter and faster than others, but lack armour. Rusviet forces are experts in close combat and melee, they are cheap, but not that well equipped. Many Saxon units like long-range combat. They are reasonably fast and well armoured, but pretty expensive. Each faction has its unique set of mechs and three playable heroes that encourage certain playstyles. At the same time, we don’t want to force players to play a certain way or to feel locked into one faction, because of their preferred playstyle. That is why factions feel different, but not to an extent like in StarCraft, for example.

What are the war machines' strengths and weaknesses, and how will players use them on the battlefield?

There will be over 30 mechs in the game, from relatively small exo-skeletons to towering giants. All of them fulfil certain roles and give players various options in combat. But none of them is superior in all situations and each mech can be brought down by smaller/cheaper units when you come up with the right tactics. This is a philosophy we apply to our hero units as well. Heroes in Iron Harvest are not super-powerful uber-units, but units that give you additional options in combats. Instead of being super-powerful, they are “super-flexible”. Not having god-like powers also means, that heroes die pretty fast when you are not thinking about what you’re doing.

I gather that infantry will be flexible and able to pick up equipment—what will different equipment enable them to do on the battlefield?

Each faction has one standard infantry unit type and there are six “specialists” in the game. You can build specialists in your base, or a standard infantry squad can become a specialist squad by collecting weapons or equipment on the battlefield. A standard Polania rifleman squad, for example, can’t damage a mech, because their bullets do not penetrate light, medium or heavy armour. But you can equip the squad with hand grenades or a hand cannon, which enables them to harm mechs. If they are an engineering squad, you can give them tools to lay mines for an ambush. If the enemy forces consist mainly of infantry units, you might want to equip an MG or a flamethrower instead. When a specialist squad gets killed, they lose their weapons/equipment. This also means that a good way to get equipment is to target enemy specialists.

You have mentioned stealth as well, how do you envision this working in the final game?

There might be one or two stealth-heavy maps in the campaign (think C&C Tanya maps), but in general, stealth is rather one of the options you can choose to try to gain advantages in normal battle scenarios. Instead of attacking an enemy fortification head-on or flanking it with heavy machinery or attacking it from the distance with artillery or mortars, you might want to try sneaking past them and attacking them from behind. Or maybe you’re letting them live, but conquer an important resource point, so they are forced to leave their fortification. The line-of-sight in the game takes obstacles into account. If you are careful, you can move infantry units into favourable positions without them being detected before opening fire and surprising the enemy.

Will the heroes be controllable on the battlefield? What kind of abilities will they have?

There will be nine heroes in the game, three for each faction. They’ll level up over the course of a campaign and with each level-up, you can give them a new skill or level up an existing skill, some of them active, some passive. The heroes have different roles. Anna, one of the Polania heroes, is a sniper. Many of her abilities have to do with stealth gameplay, range, vision and so on. Others are melee brawlers or command huge “battleship-like” mechs. Another Polania hero is “the cavalry”. It’s a cavalry officer, who gathers cavalry units around him. His squad gets bigger and bigger and becomes super dangerous for enemy infantry units on open field. He has a “charge” ability and you don’t want to be on the wrong side of that. However, his men are hardly more dangerous than regular infantry units in narrow city streets, especially when these units take cover in buildings. It’s all about how you deploy your units.

Perhaps most importantly of all, some of the heroes have pets. How will they fight on a battlefield full of mechs and explosions?

Most pets function as hero abilities. Let’s take Anna, the Polania sharpshooter, as an example. Regular sniper units have one big disadvantage: They can’t really defend themselves in close combat and when enemies are close and the sniper can’t run or hide, that’s basically it for them. Not for Anna. She calls her pet bear Wojtek, who runs into frame and attacks everybody close to Anna for a couple of seconds. He has powerful melee attacks and distracts infantry units, so that Anna has a chance to flee or maybe overpower the attackers with Wojtek's help.

The dire wolves Tag and Nacht of Gunter von Duisburg, one of the Saxon heroes, can be used in combat as well. But they are even more valuable as scouts behind enemy lines. They are very hard to spot for enemy forces and they can move very quickly, so Gunter can use them to scout out the way ahead and give his artillery a couple of new targets.