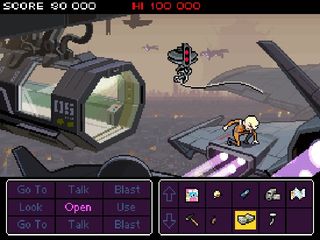 We were fools that thought we were gods—toying with the natural order to create bizarre abominations. It started simply enough: a few drops of RPG spliced into an FPS. Pretty soon, we were out of control. We had grand strategy text adventures, roguelike platformers and MMORTSARPGMOBAs. The genres were crumbling. Eventually, inevitably, it would all lead to... THIS...

Here's a screenshot of Starr Mazer:

Here's another screenshot of Starr Mazer:

It's part shmup, part point-'n'-click adventure. It's also got some RPG elements. And procedural generation.

As interesting as it all sounds, I think the key will be integrating such disparate parts into something cohesive. Starr Mazer's Kickstarter description suggests that it wants to do just that.

"You’ll walk into the Holloway-Exeter docking bay, board the Starr Wolf and control the flight sequence, blasting off to space. You’ll be bargaining deals at the bar in order to afford repairs and upgrades to your Starr Wolf and using information gleaned from characters to find hidden routes while flying between destinations. Be careful which passing enemies you attack, as not all are foes, and a few could have dire consequences. Even while facing the charging death beam of a G'ell cannon, use your charisma to dodge bullets."

That seemingly gets to the heart of what could make this genre mash-up unique. Shmups, historically, are reactive. You're constantly called on to make split-second decisions based on what's happening on screen. Rarely are you asked to react, or even pre-empt, events related to a story that runs parallel to that action.

Starr Mazzer also promises a randomised episode system, that will change the order in which the story plays out. Based on this, dynamic shmup sequences will react to the state of the world at any specific time.

It all sounds very clever, and looks beautiful. All that remains is for Starr Mazer to match its funding goal. The Kickstarter is for $160,000. So far, the campaign has raised $32,000 with 29 days to go.