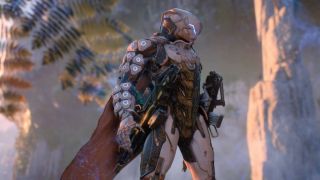 While Anthem might not have launched to the critical reception BioWare and EA were likely hoping for, there are players with some good ideas about how it can be improved. Travis Day, a former senior designer for Diablo 3 who is now working on Dauntless, is one of them. Day made a detailed post on Reddit recently, providing both a player and developer's perspective on the loot situation.

Day highlights a few problems, including a lack of clarity when it comes to stats, the ability to use inscriptions on items they won't actually work on and the limited options when it comes to farming specific types of loot.

I bounced off Anthem when I realised it was never going to be the fun Iron Man game I briefly hoped it might be, which was pretty early on, so I never got to test my mettle against Anthem's strongholds. Day's got a lot of thoughts on them, in regards to their loot and difficulty, too. He found himself running what he found to be the easiest stronghold repeatedly because it was the path of least resistance. There wasn't an incentive to fight through the other ones, because the loot didn't reflect the increased challenge.

Day suggests either making the strongholds the same difficulty or adding incentives to the more challenging strongholds, such as much better loot. Random strongholds could also stop people burning out on one of them.

The difficulty in general is another area where he has some criticisms and ideas. It just lurches from trivial to so hard it's not worth the effort, according to Day, so players just stick to farming the easy stuff instead of being challenged.

He breaks down a lot of the problems with Anthem's reward structure clearly and makes some sensible suggestions, so if you're still playing through Anthem, it's definitely worth a browse.

"I hope this sparks positive conversations about the parts of the reward system in need of attention," Day wrote. "I've been enjoying the game greatly and am intimately familiar with all the problems that come with trying to set up reward structures for a game of this nature, hopefully this is useful and can contribute to Anthem becoming an even stronger game over time."