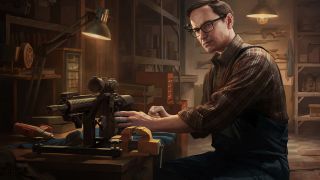 My breath caught in my throat as my target clanked down the steps. I hadn't noticed he was there until I heard him walking over some discarded metal as I rifled through a warehouse looking for loot. He spotted me lurking in the shadows as he started down from the second floor, and half-turned before I fired and cut him down. I was still coiled like a spring and had to take a deep breath, counting to 10, to stop shaking. The burst of gunfire from my unsilenced APS pistol hadn't drawn any enemies. I crouch-walked over, snagging the dog tag to confirm the kill before starting to loot. And then my heart really started racing.

When I first started playing Escape From Tarkov, everything felt valuable. Now, with access to the player-driven Flea Market—an auction house where everything can be traded or bartered to other players—I know that is no longer the case. Though our brief firefight got my blood pumping, his fully modded M4A1 assault rifle was much more exciting. The gun was a prize, both to fight with and to sell. The real profit would be when I tore it apart for the individual parts, using them to finish off builds I was working on back in my workshop.

Most people treat Escape From Tarkov like any other survival shooter, hoovering up whatever items they can fit in their inventory and trying to make it out alive. But the only thing I care about in Escape From Tarkov is obtaining obscene wealth by finding, modding, and selling guns.

Sharing some elements with battle royale games like PlayerUnknown's Battlegrounds, Escape from Tarkov is a survival shooter that is hardcore to the point of unnecessary brutality. You play as a scavenger of the fictional Russian province after war has ravaged the region. The difference is that, instead of a persistent open world like DayZ, players are dropped into a zone, given a time limit, and an extraction point on the other side. If you make it out alive, you keep what you found. Death comes quickly, though, and takes all of your gear. Matches might feel like a David and Goliath-esque fight as you engage a fully armed commando with a pistol and are rewarded with all of his gear, but more often than not you'll be taken out immediately after, your newly-stolen loot lost forever.

The Flea Market changed everything. Wealth in Escape From Tarkov often comes from the barrel of a gun, but it is much easier (and safer) to lift cash from other players by selling them fancy weaponry, items needed for Tarkov's few quests, and even Alonkya chocolate and other rare items that can be traded to Tarkov's few NPC merchants. When I saw that M4A1, I knew there was roaring demand for after-market customisation: Gas tubes, dust covers, optics, handguards. All of these parts could be stripped from this fancy M4A1 and sold off at a profit, easily netting me a small fortune of rubles. Payday, baby.

I only realized this was a smart way to make money in Tarkov after some friends and I decided we wanted to upgrade from the semi-auto ADAR assault rifle to the iconic M4A1—a highly customizable platform, and sign of our rise through the ranks of Tarkov players. There was just one problem: M4A1s can only be bought from one of Tarkov's few NPC merchants after clearing a substantial progression barrier. But you could buy them at a mark-up from other players on the Flea Market.

It was obvious these cheats had done the necessary steps to buy M4A1s from NPC vendors and were simply relisting them for 20 percent more. Instead of being outraged at the way low-level players were being milked for cash, I decided I wanted in.

I focused on pulling out valuable weapon parts, a big step up from my previous "trash panda" playstyle. I started looting more selectively. My career as an Escape From Tarkov arms dealer taught me another valuable lesson: Not all weapons are created equal.

I started out selling M4A1s that I looted from dead players, and making a small profit on each, but quickly found out that I could do better by taking the gun apart and selling the lower receiver—basically a gun's motherboard—to wannabe gun-builders desperate for a bargain. Then I could take the M4A1's furniture, like handguard, stock, and pistol grip, onto the ADAR, replacing the gun's ugly wooden furniture with tacticool polymer. Although the ADAR was a cheap entry-level gun, Tarkov players were eager to take the ever-reliable rifle into combat and have it look like a more expensive weapon.

Suddenly I was making most of my money through the ADARs, and when I finally completed the necessary grinding required to get Peacekeeper—one of the in-game merchants who deals almost exclusively in NATO weaponry like Armalite rifles and a range of matte black German-made submachine guns—I could buy the M4A1 furniture directly without having to overpay in the marketplace.

Who wants to be a millionaire

I made my first million in a couple of days, cash I blew on upgrading my in-game hideout. My second million I used to buy new ADARs and M4 parts. By then, my obsession was all-consuming. I started keeping the game open in my second monitor at work, keeping an eye out for cheaper ADAR parts. A notebook on my desk, typically filled with normal adult stuff like to-do lists that I'd spend the day trying to ignore, was now full of build ideas and hasty calculations on components.

Every player became dollar signs, and every corpse meant another potential gun sale. I wasn't alone: the marketplace is full of weapons kitted by hobbyist gun-runners like me.

But in trying to always maximize my profits, I came across a curious problem: My newbie-friendly and cheap ADARs were selling like lethal hot cakes, often being picked up as fast as I could list them, but my far more lucrative builds, like custom AKs and MP5s, weren't selling nearly as quickly. But now that I had a taste of success, the profit margin on the ADARs just wasn't good enough.

Then I hit a breakthrough: I discovered Tarkov's easy-to-miss ergonomics and recoil scores, both representing how a gun handles in combat. The higher the ergonomic score, for example, the faster you can turn and move with a gun. This system enforces some interesting trade-offs that stop players from becoming unkillable assassins. If you want to strap your AK-74M with a drum magazine so you can fire without worrying about reloading, you'll have to deal with the lower ergonomic score making the gun more cumbersome to use. Naturally, time-poor, cash-rich players are more than happy to drop several hundred thousand rubles on a gun with scores as low as possible.

Suddenly, ADARs were in my rearview mirror. I had a new way to milk other players for their hard-earned cash. Rather than flogging guns at a premium to those who couldn't access them through NPC vendors, I was catering to a more elite crowd: People with more money than I could dream of, happy to sling 150,000 rubles down for a gun capable of laser-accurate fire at long ranges. If they get killed, they simply go back to the Flea Market and buy another, and another.

These are the whales of Escape From Tarkov's economy, and their misfortune keeps me in business.

Down the rabbit hole

Before long, I practically stopped playing Escape From Tarkov altogether. When I did risk my character's life, I had a different goal: Bringing home only the items I could use to mod and create more and more remarkable builds. Take any boring old gun, slap on usable optics, a foregrip and a silencer, and even the most basic weapon starts to look twice what it's worth in parts.

I started reading through pages and pages of Flea Market listings, working out the optimal costs for individual components and putting together builds as cheaply as possible, selling them for maximum profits. The irony is that, without the money I made arms dealing, I could never afford to use most of these weapons for myself—and even if I could, I'm not sure I'd risk losing them when exploiting Tarkov's players in the Flea Market is so much easier. In my workshop I have guns I'd never dream of taking out into the field: Devastatingly accurate long-range rifles, practically recoilless AK74SU submachine guns, glocks that look like something out of Robocop. All of them built for other players while I'm skulking around with cheap submachine guns and a can-do attitude.

Before Tarkov finally launches out of Beta, there's at least one wipe planned that will reset everyone's accounts, a clean slate for the next version of the game. You could argue that my work arming all sides of the conflict is for nothing. I'd disagree. If nothing else, I've learned the depths I'll go to to make a profit, and while the future will see me losing that suitcase full of money and a stash full of rifles, knowing how to cater to Tarkov's wealthy elite is one thing the developers can't wipe.

Tips to help you get started gun running

Aesthetics can be worth big money: When I started selling ADARs, I was mostly ditching the unattractive wooden stock and handguard combination, switching it out for polymer gear. This made a pile of cash even though the guns weren't really that much better.

Get familiar with linked searching: How you search and filter Escape From Tarkov's Flea Market is in desperate need of an overhaul, but in the meantime get used to right clicking items and using 'linked search' and 'filter by.' The first option will show you items related to the item you right clicked, like compatible mods or guns. The second will immediately show you all the versions of that item for sale, so you can compare prices.

Strip out the magazine: this ups the ergonomics of the weapon, making it look like a better performer than it really is, and you'll save a few thousand rubles depending on the magazine. They're cheap, so most players won't be upset if the gun they buy is missing one. Sure, it's cheeky, but they might try to use that gun on you at some point.

Reinvest your profits: It can be tempting to spend all of your cash on fun gear, but one bad run can ruin a day's work on the market. Use your profits to upgrade your hideout to allow you access to powerful crafting options, and buy plenty of weapons to put into your own personal workshop and slowly build up over time. Don't buy what you can't afford to replace ten times over.

Get into branding: Using presets, you can name your weapons. This isn't just a cool way to distinguish your builds, it also lets you save time by quickly shopping for the components you need to build another model.