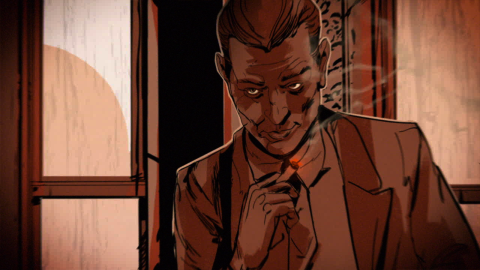 The presentation is aced, but Hard Wests turn-based combat is too rote to be engrossing.

There are no Clint Eastwoods in Hard West—no cigarillo-chewing badasses who stand in the middle of the street and wipe out posses by spinning off four shots in a single motion. It’s more like I’m controlling the Wilhelm-screaming extras in a big western shootout, popping their heads up and firing one shot at a time, turn after turn, like animatronics. It can be fun—especially when I do pull off something cool, like banking a shot off a spittoon—but mostly it’s a lot of staying put and shooting at whatever I can see.

Hard West is told in a series of short frontier stories which play out as choose-your-own-adventure-style text prompts on an overworld map, and in XCOM-like turn-based combat scenarios. The former part is quite good. The voiced narration is excellent and the writing is efficient. The stories are a bit banal, cobbled together from the most basic components of the acid western genre—betrayal, lost treasure, pacts with the devil, curses, chapels, and shamans—but their telling is a fun hodgepodge of systems and decisions.

In one story, my posse—always represented by a skull which floats between locations—wandered the map mining gold while a crime lord siphoned the profits. At one point, I had the option to build an escape tunnel under my homestead (for a price), which let me sneak in during a combat encounter later on. I also went too far into one crumbling mine and busted one of my character’s hands. (I really wanted that gold.) These are cool little vacations between fights, not nearly as elaborate or gorgeous as something like 80 Days, but interesting for how they affect the turn-based combat, which is really the main act. A hungry gunman is weaker, and a cursed or poisoned frontier explorer won’t shoot well at all. There are bunches of stat boosting or usable items to find or buy—poison grenades, doses of opium, magic relics—along with special abilities and weird, experimental guns to pass out to your crew before combat.

The combat and the campaign structure, though, form something that left me feeling dulled and tired. I enjoyed many parts of Hard West’s whole—the mournful horns (composed by Witcher 3 composer Marcin Przybyłowicz), the harsh sun and dense game boards, the whizz of bullets as they smash through windows and thunk into madmen with a squirt of blood—but it’s always either too easy, or so perilous that the only viable option is a drawn out, tedious game of hide-and-go-seek.

For one thing, each of the eight story scenarios ended before I could develop much of a relationship with my crew and their gear. It’s a novel format—the stories are all connected, but usually star different characters—but means that every couple hours I had to give up my posse and start again. All the little decisions that colored my journeys and gave me buffs or debuffs, long-range rifles or shotguns, really only mattered in a handful of combat encounters before it was off to the next tale.

In combat, the turn-based strategy rules will be familiar to XCOM players. Each character has two action points, and on a given turn they can choose some combination of moving on a grid, shooting, reloading, and using special abilities or items. Depending on range and position, shots have some percentage chance of connecting, and do less damage when an enemy is in half-cover, and very little if they’re in full cover. Some weapons are best at short range and some at long range, and some have special attributes, like the derringer, which can be fired twice in the same turn.

It’s no clone, though: Hard West differs from XCOM in many little ways, sometimes for the better. Reloading only takes one action point, for instance, so it’s possible to reload and shoot on the same turn, so long as you don’t move. In Enemy Unknown, needing to reload was an, 'Oh crap, I forgot to reload moment,' but here it's more a part of my planning. There are guns that can only hold a single shot, and special abilities that require all your action points, so sometimes it’s best to reload, wait until the next turn, and then move into a dangerous position and take a shot—hoping it kills the danger. But if it doesn’t, you’re probably dead.

On the default difficulty, Hard West is manageable—I breezed through some scenarios—but everything can end very suddenly. Many characters are vital to the story, and must survive. And they're fragile: caught out of cover, most of your gunslingers will eat dirt after one or two hits. Because Hard West takes line-of-sight very seriously—to the point of being irritating—I occasionally moved characters into what seemed like a safe position, then watched as an enemy strolled out from behind a building and blasted them in the back. Or, I tried something risky and failed, and there’s no coming back from that. Time to start over, as there’s no mid-mission saving.

The vital characters don’t create a fun sort of tension. I’m not attached to them, I just want them to live so I don’t have to do the whole mission over. And parts of several missions are an absolute bore. In one, for instance, I could sneak around guards freeing three prisoners. Stealth is pretty silly in Hard West, because the guards don’t move from turn to turn, so you can just dutifully click where their vision cones aren’t. But after all that mindless work, one bad move in the ensuing firefight and I had to do it all again (though the second time I just opened fire immediately, which I'm thankful is sometimes an option).

No time for bravery

These aren’t randomly generated missions, either. Every scenario in Hard West is designed to tell a specific story—stopping an execution, defending a homestead, freeing a prisoner—and every enemy is placed. The macabre tales of supernatural frontier drama are enjoyable, and some missions take some tough feats of positioning, but many are best solved through caution and the foresight afforded by repeat playthroughs. I tried playing on the hardest mode, and while it’s certainly hard, victory was a matter of toiling through scenarios again and again until I knew all the right moves. In one mission near the end, it’s just one guy against a horde of possessed villagers, and all I could do was send him trotting around in circles to be sure no one could walk up behind him, taking shots when I could, and using a special ability to dodge incoming bullets whenever I was allowed. That's not a great story, especially after one mistake 20 minutes into this chase scene made me do it all over again the same way.

There are great little stories to earn, though—snippets of missions that felt fantastic, like when I used the ricochet ability I mentioned, or the time I correctly predicted that an enemy was going to move on the next turn, and hit him with an artery shot that caused him to drop dead after a few steps. (If only the characters could say “omae wa mou shindeiru.”). I’ve only used some of the special abilities effectively a few times. It’s like pulling a very specific card in a complex board game, holding it for the whole game, and then realizing that you can finally use it and slamming it onto the table—oh yeah! That’s a hell of a good feeling.

But the other things that make tactical combat fun—forming and executing a long-term plan, taking gambles, telling a story—are muted here. Enemies are either stuck behind full cover, taking one damage per hit as I whittle them down, or are dumb enough to end their turns in the open, which is almost certain death. Trying to outwit them isn’t really necessary, as they don’t have much in the way of wits, sometimes wandering around aimlessly like dolts. And for all the effort I put into distinguishing my characters from each other, I mostly ignored their specialties. There just isn’t much room to move around and try out interesting tactics. Get too close to a group of enemies to play with a shotgun’s area attack, for instance, and on the next turn one of them is likely to walk right up to your dude and shoot him in the face. With so little room to err as part of my story, my story becomes a pretty dull one.

There’s a lovely presentation to Hard West, though, and all the pieces are individually fun to toy around with. It’s got great music and stories that mix frontier myth with demons and madness-inducing asteroids. It’s a set of little suited, hatted gunslinging figures and miniature western towns and a big rulebook dictating sight-lines and cover bonuses. But most of the scenarios just aren’t much fun. Hard West really cries out for user-generated scenarios and rule tweaks, because all the pieces in the box could be put to wonderful use if the community could customize them.

The presentation is aced, but Hard Wests turn-based combat is too rote to be engrossing.