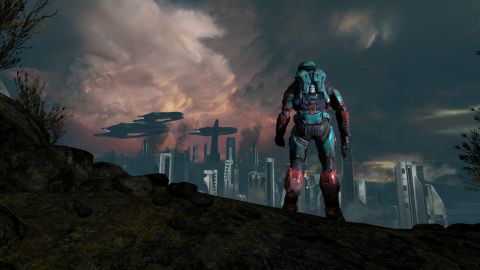 A PC port that minimizes Halo: Reach's flaws and highlights its strengths, from the unique campaign to the joy of a clean headshot.

I literally cackled the first time I fired a sniper rifle in Halo: Reach's PC multiplayer. Two shots, two kills, heavy caliber rounds crossing the map and cracking skulls as casually as you'd order off a drink menu. In the thousands of hours of Halo I've played on consoles in the last 15 years, I've never been a good sniper. With a controller, a headshot was a minor miracle. With a mouse, I point at the thing I want to die, and it obliges. But the same goes for everyone. Playing Halo: Reach on PC is like bringing death lasers to a fight designed for blunderbusses.

What is it? A first person shooter about the end of the world
Reviewed on: GTX 980, i7-6700K, 16GB RAM
Price: $10
Release date: Out now
Publisher: Xbox Games Studios
Developer: Bungie, 343 Industries
Multiplayer: 16-player multiplayer, up to 4-player co-op in camapign and Firefight
Link: Halo Waypoint

Is this what the weapons and maps and abilities were designed around? Hell no. Is it balanced? Absolutely not. But now I never want to play Halo any other way.

Halo: Reach was made for the Xbox 360 in 2010, and nine years later it's the first part of the Master Chief Collection, an anthology spanning the Halo series, to arrive on PC. Playing it again for the first time in many years, I think it's still a shooter worth experiencing in 2019. The campaign, which lasts for six hours or so, sticks closely to the formula that makes Halo great. Each mission threads together big, open-ended combat encounters against an endlessly killable group of enemies with a freedom still rare in shooters.

Sometimes I'll go out of my way to kick a puny Grunt out of his Ghost, a one person anti-grav vehicle with a nasty pair of laser cannons, just so I can use it to run over his friends. Other times I'll hang back and use a rifle to pick off Jackals, who crouch behind defensive shields, by shooting them in the hand and then in the head, the most satisfying two-shot kill in videogames. There's fun to be had even with puny weapons like the needler, which home in and lodge in flesh until they explode, killing anyone foolish enough to stand nearby.

The real threats are the Elites and the Brutes, whose AI can occasionally still be intimidating today. They'll dodge grenades and try to get around behind you, and killing them first has many advantages. It'll stop them from rushing you for a deadly melee, and their Grunt escorts will sometimes even flee in terror when you take them down. But they're shielded and much harder to kill, so focusing on them can be dangerous when you're being peppered with shield-draining fire from the Grunts and Jackals in their squads.

I've probably killed tens of thousands of Elites in my life, but in Reach I still loved tracking them with my rifle and ping ping pinging them with bullets until their shields popped, then delivering those final killing bullets to their heads and watching them crumple. Reach is also constantly offering other ways to make that kill: a shotgun that you pull out when an Elite charges right at you with a roar, or an energy weapon that drains their shields far faster than bullets, or a warthog that turns them into roadkill.

In most shooters it's fun to switch weapons to decide what kind of carnage you want to dish out in the moment, or what works best against a particular enemy. That's true in Halo, too—but because you can only carry two weapons at a time, and you don't have a permanent arsenal the way you do in a game like Doom, every mission is a series of on-the-fly adaptations. I'm constantly analyzing the most efficient or creative ways to work with what's around me. In one tough firefight against two squads of Brutes, I made a beeline for one of the leaders, killed him before the rest caught up, grabbed his massive hammer, and smashed the hell out of everybody else. The freedom of every encounter is key to why Halo's enemies are still fun to shoot, even though they haven't changed much over almost 20 years.

The best Halo missions weave together open areas and vehicle segments with close quarters battles, alternating between setpieces and smaller moments. In most Halo games, there are one or two missions that string together all of these pieces and really stand out. But in Reach, that's most of the campaign, and there isn't a single bad mission in the entire bunch. There's no fat on this game.

The story, which puts you in the armor of a new member of an elite Spartan squad, gives you sketches of personalities rather than the sense that you truly know the characters you're fighting alongside. You know which Spartan is the tough guy, for instance, because he's always playing with his knife (and he has a skull carved into the visor of his helmet). Reach tries really hard for poignant, sentimental moments as members of your squad die, with a sad piano score for every tragedy. But we don't get to spend enough time with any of them to really feel the gut punch.

Still, Reach does feel remarkably somber, which is hard to pull off in a bombastic action game about shooting aliens. The campaign is about those aliens, the Covenant, invading a vital human world and slowly destroying it, despite everything you throw at them. Every mission you complete ends with success—saving a naval base, destroying a Covenant supercarrier, evacuating civilians from a besieged city—and is then immediately undercut. As that ship explodes, a dozen more warp into orbit to shell the planet. After you fight to save the city, a nuke obliterates it.

It's hard to make a hopeless war fun to play, but Reach leaves a heavier emotional imprint than most shooters I've played. The only one that comes to mind that does it better is 2014's Wolfenstein: The New Order.

After experiencing the story, I'm already eager to jump back into my favorite campaign levels with 4-player co-op, and so far my experience playing online, both in co-op and competitive multiplayer, has been great. The Master Chief Collection uses dedicated servers, and I've experienced almost no lag in the 10 hours or so of multiplayer I've played. The game feels smooth, even in the co-op Firefight mode, which, like the campaign, requires the game to keep track of dozens of AI units at once.

Back on the Xbox 360, without dedicated servers, this mode was almost unplayable online. Today, on PC, it's practically indistinguishable from playing solo. Dedicated servers make a huge difference.

So does the performance of a modern gaming PC. On my system with an i7-6700K and a GTX 980, Reach ran at over 200 fps at 1440p resolution. By default, the game is set to 60 fps, and there are still some issues with its unlocked framerate. With VSync off, Reach has distracting screen tearing unless you own a G-Sync or FreeSync monitor. Even with G-Sync on, I experienced a very rare stutter that I initially thought was the campaign loading, until it happened in multiplayer. It's a minor enough issue to barely register for me, and the developers have already acknowledged they're working on improvements to the unlocked framerate implementation. They've said the same for Reach's audio mix, which is unfortunately poor and sounds a bit muffled on PC.

Again, though, it didn't stop me from having fun with the game—playing with headphones and adjusting the audio balance to bring voices and sound effects up over music, I didn't have a problem hearing what I needed to.

Ultimately the issues with Halo: Reach on Steam wash away the moment I start aiming with a mouse. Halo multiplayer on PC is fundamentally different than it is on consoles—with mouse aim, accurate long-range weapons like the DMR really dominate maps. Most of the guns become irrelevant. And Reach's other issues from 2010 remain: Halo has always had the DNA of an arena shooter, where everyone is on equal footing and controlling the map is key to victory. Reach added "armor abilities" like sprint and invisibility and a hologram decoy, and weapon loadouts that change your starting firearms. Neither makes the game more fun to play, and they're definitely not fun to play against when you expect to be on even footing. They're why Reach's multiplayer is probably my least favorite in the series, overall.

But playing it now on PC, I'm finding armor abilities and loadouts don't bother me nearly as much as they once did because the basic gunplay is so satisfying with a mouse—Reach is more fun than ever with pinpoint accuracy, and the enhanced power of a basic rifle minimizes the effect of those balance issues.

As the Master Chief Collection expands, I expect I'll play Reach less and the first three Halos more. They all have great selections of multiplayer maps, and more importantly, the simplicity of no armor abilities and no loadouts. But it's exciting to come back to Reach after nearly a decade and find its multiplayer more fun than ever, in a port that bodes well for the rest of the series.

A PC port that minimizes Halo: Reach's flaws and highlights its strengths, from the unique campaign to the joy of a clean headshot.