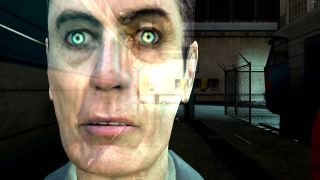 Valve has finally vanquished a few more bugs in Half-Life 2. We might never get to play the conclusion, but at least we can rest easy knowing that NPCs can blink once again.

Half-Life 2's NPC have been stuck in this nightmare since 2014, when Steam switched to the SteamPipe content distribution system. The change caused problems for a lot of Source mods and games, but the absence of blinking was definitely the most eerie.

Update: This belated bug fix wasn't actually the harbinger of a third Half-Life game but Valve has since announced a new VR prequel called Half-Life: Alyx coming in 2020.

Despite the visibility of the bug and the mountain of threads bringing it up year after year, Valve seemed content to let its NPCs stare for eternity. Unofficial patches solved the issue, but now Valve's finally put out an official fix. An update went out yesterday and deals with a few other lingering issues.

Half-Life 2: Episode One and Two, Lost Coast and Half-Life: Source have also been updated.

I just started a new game to see for myself, and both the G-Man and the NPCs on the train have full control over their eyelids again. Revolutionary! I'm sure they're very relieved.