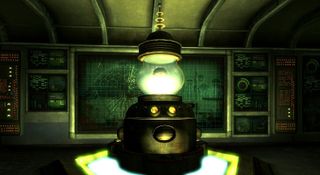 The Old World Blues expansion plays up the 1950s B-movie side of Fallout, where radiation is more likely to lead to mutations than tumours, robots are best when they have pincers for hands, and brains belong in jars. Specifically, your brain belongs in a jar.

When you travel to the Big MT, where mad science rules, you're lobotomized—and your heart and spine are removed too, because why leave a job half done? The goal of Old World Blues is to retrieve your brain from the extravagant Doctor Mobius so you can get the heck out of this bizarro zone with its robo scorpions and cyberdogs. After fighting your way across the Big MT with a variety of new laser guns and a power fist superheated by a genocidal toaster (don't ask), it turns out the brain you've come to rescue doesn't want to be saved.

Comfortably floating in a tank full of nutrients with access to a sizeable library, your brain doesn't want to go back in your head. It accuses you of ignoring its advice in favor of listening to your glands and getting in way too many fights. It's hard to argue against that logic. New Vegas is the Fallout game that makes melee weapons and unarmed attacks fun, so you've probably been punching or slicing half your problems. And with the right perks you can seduce your way across the wasteland, even sleeping with the guy who shot you in the head back in the opening cinematic.

And yeah, this is a game that opens with a bullet entering your brain. Of course your brain doesn't want to go back in your skull, that's where the bullets get aimed.

While you've got the option of using various skills at the disposal of your cyborg replacement brain and its gland-based decision-making to convince your organic brain it's actually worth re-joining Team Kiss Kiss Bang Bang, there's also the option to just let the argumentative lump be. It can have its Brain Brexit and stay in the Big MT forever, while you, a lobotomized half-machine, go back to the Mojave and finish New Vegas without it, bullets bouncing off your metallic dome as you return to fighting cazadores and Roman legionary cosplayers. Who needs a brain anyway? Not somebody with the Black Widow perk and a tesla cannon.