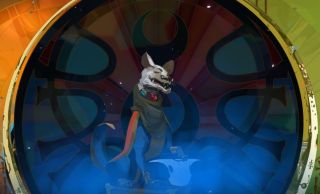 Supergiant's Pyre seems like a weird hybrid of a party-RPG and a 90s sports game for the first few hours, holding its narrative cards close to the chest. But when those cards finally hit the table the implications are weighty. Each time your team wins at The Trials, you get to send one of your teammates home from exile in the gloomy Downside to a much brighter future in the Commonwealth above. But this also means they leave your party forever. And never was this choice made more difficult or painful for me than in the case of Rukey Greentail.

Rukey is a rambunctious little, mustachioed… fox? Thing? And to say he was my star player would be understating it—he was the key to my whole offense. The point of almost every play was to get the orb to Rukey so he could scamper, scurry, dart, and dodge past the enemy team to slam and/or jam a few quick points into their pyre. When Rukey got a clean drive, he made it look easy. I based my entire strategy and playstyle around him. Why would I ever want to let him go?

But over time I started to connect with him more and learn some things that made my eyes sting. In his private moments, his only thoughts were of his dear old mother back in the Commonwealth and how worried she must be for him. He was genuinely heartbroken that his exile must be weighing so heavily on her, and that she was left to care for the rest of the family without his help. There were other exiles with very good reasons to be sent home, but Rukey connected with me the most on an emotional level. The Point of Maximum Feels came when I stumbled upon Rukey, unaware of my presence, praying to the stars that I would choose him to return home in the next trial.

Dear readers, scarcely ever has a game character hit me with such a Big Oof.

And yet the fact remained: He was my star player. Letting him go risked our success in all future trials, which could mean no one would get to go home after him. So I tried to have it all. I gambled Rukey's future on a gambit that would let me keep him as long as possible while still eventually letting him return home. One by one, I sent less deserving exiles back and asked Rukey to hang in there, planning for him to be the last exile I redeemed in the final, most difficult trial.

This made our final match the most intense and nail-biting I've ever played. Even in other sports games when I've spent dozens of hours working my way up to the championship, nothing compared to the thought that I was playing for my dear friend's future. A future I could have secured a long time ago if I hadn't been so selfish.

It was a close match, and I don't know that I would have been able to live with myself if we'd lost. But thanks in large part to Rukey, we came out in glorious victory. And at the last moment, I was given an unexpected choice that had up until now been off the table: I could be the one to go free in the final trial. The Commonwealth could use my leadership in these trying times after all…

I didn't hesitate. It had to be Rukey. He waited longer than he should have had to. He gave our team more than we deserved. It was one of the most satisfying gifts I have ever given another character in a videogame, even as he protested and tried to convince me to take his place.

And then the stars went out, trapping the remaining three of us in the Downside forever. The headstrong Daemoness Jodariel and the fish knight Sir Gilman would be my eternal companions in this prison. And we all took it in stride. How could we possibly begrudge Rukey going home to his dear, fretting mother? I like to think we all lived happily ever after. This one's for you, Rukey.