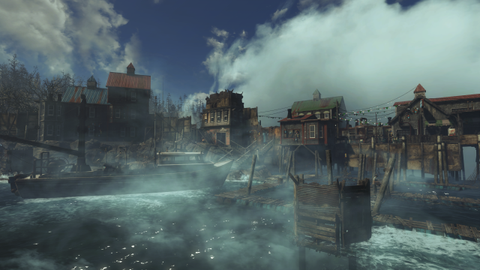 A great setting, a good story, and more dialogue-based solutions than the base game provides.

Fallout 4’s HUD has alerted me to an enemy, informing me in red capital letters that I’m facing GIANT HERMIT CRAB long before I’ve even had the chance to see it. My perception is apparently so great that I can identify an unfamiliar species through the walls of a house. As I skirt around the dilapidated building, I still don’t see the crab. Is it behind the rusty truck I’m facing?

No, it’s in the rusty truck I’m facing. It’s using the truck as its shell, in fact. The crab scuttles toward me—if something so huge can be described as scuttling—and when I begin to empty my incendiary minigun into it, it retracts into its metal shell and begins flinging its young at my feet to be chewed up by my spray of hot lead. Mother of the year.

Hermit crabs aren’t the only giants in Fallout 4’s Far Harbor expansion. There are enormous mutated praying mantises called fog crawlers, truly towering mirelurk queens, deathclaws (naturally), and a host of giant frog and lizard monsters inhabiting the expansion’s new landmass. The island itself is big, too, and has a sizable main story to match. It begins when you listen to the Valentine’s Detective Agency Radio signal, which summons you to Diamond City to learn of a new case involving a teenage girl who has gone missing from her home.

Has she been abducted? Is she a runaway? Honestly, she’s mostly just an excuse to get you to Far Harbor, where you’ll quickly forget about her and become embroiled in the tumultuous relationship between the island’s three factions. The island is shrouded in radioactive fog, which poses a threat to Far Harbor’s human residents and fishermen. Also on the island are the radiation-worshipping Children of Atom, who are big-time fog fans and would love to see it smother the life out everyone else. Meanwhile, there’s a colony of escaped synths looking for a fresh start while hoping to broker a peace between the other two camps.

None of this can happen without you, as the population of these three groups stand around doing nothing to help themselves, seeing as how they’re weighed down by the thousands of caps they’ll give you to retrieve missing items, clear out monster nests, solve petty squabbles, and investigate minor mysteries. The main quest involves the resolution of the feud between Far Harbor and Atom, and the discovery of the true nature of the mysterious synth helming the robot refuge. I’d suggest bringing Nick Valentine with you—some of the story concerns his own mysterious origins.

I played in a fairly moral fashion, and did my best to arrive at diplomatic solutions, though in the end I still wound up feeling a bit dirty, which is as it should be. There’s no sunshine and roses here, and no one, myself included, really comes out of it a hero. There’s just the best of some grim decisions, but I’m pleased to report that most story missions could be resolved through not just violence but with dialogue. The only detriment to the story is that the Children of Atom, being moronic religious zealots, aren’t that easy to sympathize with as a whole (though a few individuals in the cult are perfectly likable). In other words, players with less stringent morals who won’t mind a few innocent casualties probably won’t have the toughest choice to make or have a problem with resorting to mass destruction to bring about peace.

While I enjoyed most of Far Harbor, one major misstep comes in a story mission where you need to enter a computer simulation to recover some protected data. It’s set up like a puzzle, where you have to place blocks to bridge gaps, station sentry guns to battle automated defenses, and reflect a beam of light through certain cubes to gain access to the files. It’s not a bad idea—I like beam puzzles and goofy computer simulations—but it uses the same first-person object placement system as Fallout 4’s settlement building feature does, and we all know how clunky and irritating that is. The visuals of the simulation are completely dull and the AI doesn’t always work properly: thankfully, there are only a handful of levels to suffer through.

The island itself is perfectly enjoyable to explore: gloomy, marshy, shrouded in mist and prone to radiation storms. It’s a spooky and atmospheric setting, weird and evocative even in broad daylight. It’s not that heavily dotted with locations, but there’s enough exploring, combat, and mission running to keep most players busy for 20-plus hours. There are also plenty of raiders (here they’re called trappers), supermutants, ghouls, and some new weapons to kill them with, such as a harpoon gun and a lovely giant hammer equipped with an afterburner to help you swing its radioactive head. There’s also a new companion in the form of a grizzled and salty old coot, and a few new settlements to build (if you haven’t already had enough).

Far Harbor is a bit pricey but worth it for those looking for a good amount of new content and a real departure in setting. More dialogue-based resolutions are also welcome: I feel like I did more talking, and likewise more listening, than in Fallout 4 itself.

It certainly has an atmosphere. You can literally taste it.

Fort on top of a lighthouse? I'll be having that, then.

I don't solve every problem with talking.

If this is what the inside of a computer is like, I'm never opening mine again.

Maine wasn't spared by the bombs. But you probably knew that.

Let me guess. You have a bunch of problems, and a bunch of caps. Am I warm?

There's something fishy about this town, and it's not just the fish.

Do you really want to eat me? I'm mostly metal and ammunition.

A great setting, a good story, and more dialogue-based solutions than the base game provides.