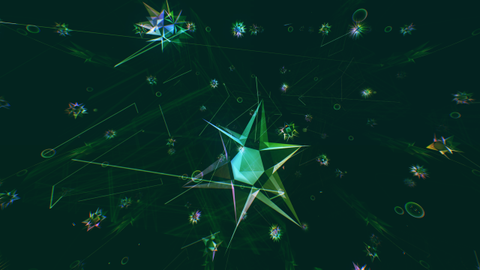 Funny, philosophical, and deeply, deeply weird, there’s nothing else quite like Everything on PC.

What is it? A game that’s impossible to sum up in a sentence.
Expect to pay £11/$15
Developer David O’Reilly
Publisher Double Fine Presents
Reviewed on GTX 970, Intel i7-5820K, 16GB RAM
Multiplayer None
Link Official site
Buy it Humble Store

A swarm of beetles dance together in swirling concentric circles. A blade of grass gets existential. A birthday cake regrets not getting to know its father more before he died. A trumpet flies through a surreal void playing a distorted tune for an audience of floating eyeballs. These are just a few of the things I witnessed in Everything, a game that takes you on a surreal, dreamlike voyage from the microscopic to the macroscopic.

I start as a snow leopard roaming across a peaceful snowfield littered with trees, rocks, and other wildlife. I see a group of penguins ahead and I call to to them, and a symbol blinks on the screen indicating that I can now descend. I do so and find myself controlling one of the penguins, waddling and squeaking. Then I descend further, to a tuft of grass poking out of the snow. Then lower still, to a feather lying on the ground.

I float around as the feather, and can see my penguin in the distance, hazy and indistinct, now the size of a skyscraper. But I can go deeper. I descend to a splinter of wood. Then a microbe. I’m now swimming around in a microscopic soup of bacteria, spores, and tiny organisms.

But now it’s time to ascend. I retrace my steps until I’m in control of the snow leopard again. I ascend to a tall oak tree, then suddenly I’m in control of the entire continent, drifting across the ocean. I ascend even higher, controlling the planet, then the sun, then the galaxy it’s in. The sense of scale is incredible, and the seamless journey from microbe to galaxy is both technically impressive and strangely humbling.

Everything you inhabit in the game, whether it’s an animal, an inanimate object, or a subatomic particle, can be moved around. And as you explore the world around you, be it a forest, desert, ocean, or the depths of space, you’ll see icons that will trigger conversations. Some are funny—the game has a charming, mischievous sense of humour—while others are melancholy, reflective, and surprisingly emotional.

You’ll also discover audio recordings of the late philosopher Alan Watts, whose sober, thought-provoking ruminations on the nature of existence give the game some thematic weight. And there’s something serene about the way his reassuring voice mingles with the dreamy ambient soundtrack as you meander through the world.

There’s a collection element to Everything too. Every object you control is added to a vast, ever-growing library, and you can instantly transform into anything you’ve previously inhabited. But in general the structure is pretty loose. There’s no driving purpose, and it doesn’t really need one.

I was content to just float around aimlessly, experimenting with the simulation and looking for new things to take control of. It’s a gentle, ambient experience. Something to swim peacefully around in. You can even sit back and let the game play itself. Let go of the controls and the AI will take over, with the option to choose which activities it focuses on.

A few hours in, the game encourages you to travel through a portal. You don’t have to, but you absolutely should. It whisks you away to a strange new world where the rules of the simulation are rewritten, creating some truly bizarre moments. But I’ll leave it at that. Discovery and surprise are an important part of Everything’s peculiar magic.

There’s a lot you can do in the game that I haven’t mentioned here. Objects can interact with each other in interesting ways, which you unlock as you progress through a lightweight, unobtrusive tutorial. It’s an odd, bewildering game, but gives you space to get to grips with it at your own pace.

Honestly, I didn’t like Everything much at first. I thought it was slightly pretentious and a bit dull and ponderous. But after a slow-burning first hour, when I started ascending through the cosmos and descending into the microscopic building blocks of life, I fell in love with it. It makes you think about life and your place in the universe, but it’s silly and playful too, which is a combination that shouldn’t work as well as it does.

Funny, philosophical, and deeply, deeply weird, there’s nothing else quite like Everything on PC.