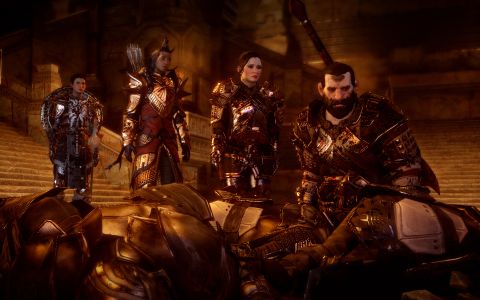 Too brief and inconsequential to live up to expectations. One for Dragon Age lore obsessives and ardent completionists.

There are two types of long-term Dragon Age fan: those who despise the Deep Roads and those who don't mind the Deep Roads. I'm in the latter camp. Extended underground sections are to fantasy games what Tuesday is to the rest of the working week: something you're just going to have to get through, one way or another.

The Descent marks Inquisition's most substantial foray into Thedas' squarest and most orange series of tunnels, luring you in deeper with the promise of loot and a mystery to solve. That mystery is not, as PC Gamer's Phil Savage suggested, "why are we still going to the Deep Roads." Nor is it "what lies beyond the Deep Roads" because the answer to that is "different caves, which are blue."

The secrets lying at the end of The Descent will be of interest to hardcore Dragon Age lore fans, fleshing out another aspect of the series' esoteric but well-conceived fiction. I'm one of those people and I'm glad I played it for that reason. But this is otherwise a story-light expansion, with only a handful of quips recorded for each of your companions. The plot is held together by two new characters, dwarven scholar Valta and Legion of the Dead commander Renn, who are likeable but whose journeys are familiar and brief. The cinematics are of a notably lower quality than those in the base game or Jaws of Hakkon, and if you stick to the critical path then you'll have seen the entire thing off in three hours.

Reason to stick around is provided by collectibles, puzzles and sidequests spanning the Deep Roads and beyond. The expansion comes with its own miniature version of Skyhold's war table, allowing you to send Inquisition forces on missions to repair ancient passageways and open up new areas. This in turn allows you to finish off sidequests similar to those offered in the open world—collect dwarven cogs (see also: shards) to open doors, follow scrawled maps to hidden loot. It's fine, but if you've played enough Dragon Age to be interested in this expansion then you've done this before. The Deep Roads are a little more dramatic and expansive than they were, thanks to the Frostbite engine, but they're still the Deep Roads.

There's also new gear to collect, new schematics for crafting, and a new set of enemies—but once again, none of it ventures too far beyond what the rest of the game has taught you to expect. As a consequence, The Descent struggles to feel like anything more than an interlude. I can already envisage the conversation in a year's time when I tell a friend that this is The DLC You Skip.

It also feels like a misstep to sell The Descent at the same price-point as Inquisition's previous narrative expansion, Jaws of Hakkon. They're night-and-day in terms of scope, production values, character and lasting import. The Descent isn't terrible, but it's eminently missable. BioWare have always done this—put out quicker, cheaper-feeling DLC between the good ones—but it's become a habit I rather hope they break away from.

Too brief and inconsequential to live up to expectations. One for Dragon Age lore obsessives and ardent completionists.