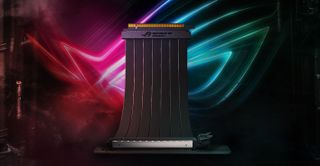 Depending on the case you own, a PCI Express riser cable is all that stands between you and mounting your graphics card vertically so that its fancy cooling shroud is on full display. It's a great accessory, but is it worth $59.99? Asus seems to think so.

Asus just launched its ROG Strix Riser Cable (RS200), and it is available to preorder on Amazon for precisely that price. It will be in stock February 2 (Super Bowl Sunday), so you'd be looking at receiving it next week if you ordered one.

Value is subjective to an extent, though if you're brand agnostic, PCIe riser cables can be found for around $18, provided you're willing to take a chance on unknown companies like EZDIY-FAB. Otherwise, you can snag a Thermaltake riser cable for $24.62, which is less than half the price of the ROG Strix model.

For what it's worth, Asus is claiming a higher level of quality with its ROG Strix model, with an apparently patented "SafeSlot" design:

It also offers EMI shielding, "resistance to corrosion," and is 240mm long. And there's the ROG logo and branding that sits one of the connectors, though it will be hard to see once you plug it into your PCIe slot.

There's no RBG lighting here, nor support for PCIe 4.0. You can still use this cable with an AMD X570 motherboard (the only consumer chipset that supports PCIe 4.0), but Asus says you'll need to go in the BIOS and select PCIe 3.0 before installing it.

To be clear, I haven't tested this cable, but I know enough about riser cables to say that $60 is a tough ask.