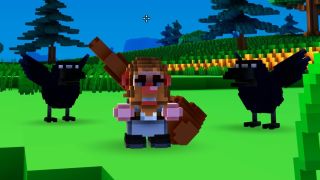 I didn't expect much from Cube World, but it still bums me out. The product of a two-person development studio, Cube World was announced during the peak of the Minecraft craze way back in 2011, promising to bring structure and quests and fantasy adventure in its own infinite voxel-based world. But Minecraft has since added all manner of quests and story and unexpected features, a game with the backing of Microsoft's bottomless pockets and resources as opposed to the smarts and finite energy of two people. Cube World never really stood a chance, but at least the map UI is nice.

Cube World gets right to it, dumping my lovingly crafted dwarf warrior into a small village with zero pageantry. I'm in a world made of cubes, as the title suggests. Besides a lack of tutorials explaining crafting, combat basics, and any goal whatsoever, there's not much mystery or allure to Cube World's cube world. The premise, from what I can gather, is basic fantasy bullshit. There are different races of NPCs wandering about all over—ogres, elves, dwarves, humans, frog people, and so on—running into mobs, chilling by campfires, or stuck in corners, feet treading the air like they just don't care.

Above: Combat is messy.

They have some things to say, namely about various artifacts strewn about my starting region. Every third NPC chastises me because I haven't found the Magical Book of Crafting yet. Others mention named landmarks and drop a little pin on my map. That's all the context I have, the kind of breadcrumb trail figure-it-out-yourself ethos I treasure in a game like Dark Souls, where unraveling the detailed, atmospheric environment is enough of a reward to incentivize picking a direction and wandering aimlessly.

In Cube World, it's just a world of cubes. Cubes in all directions, some in the shape of trees, some as rocks, some as wild herds of Scottish Terriers, the rare stone pedestal with two sentences of disjointed "procedurally generated lore" written on it.

I test the intrigue of the cube world by picking a direction and walking to see what I stumble into. I stumble into lemon beetles and apple-shaped things with legs and bats that walk rather than fly. Crows choose to walk too, but they're chill. Each unfriendly mob punches me to death, my flailing club and dodgerolls doing little to chip away at their health or get out of the way.

Above: I pick an interesting spot on the map and fumble through the dark for 10 minutes, only for this to happen.

Enemies love to give chase and will do it for quite some time. I took a herd of rock monsters back to town and let the locals take care of them. A few Scottish Terriers died in the fray. Sorry.

I pick some new directions and wander again, but not before taking a closer look at the map this time. I zoom in on a massive volcano and it grows, providing a detailed isometric perspective of the area. It's easy to get a sense of the surrounding topography and the potential obstacles between me and my goal.

For a minute, I get a whiff of exhilaration, imagining what Cube World could be. Forever wandering an infinite landscape, carefully navigating dangerous terrain and choosing destinations purely based from the menacing silhouettes they cut on the lovely map tool—like a Breath of the Wild saucepan reduction. But navigation isn't a challenge, just a time tax. It's easy to skirt around high level mobs and snap up the nearby goods, be it an artifact, crafting materials, or, most often, some more extremely bad procedurally generated lore.

My first major discovery is a bit anticlimactic. I find a magical lute behind an empty stone house that 'opens certain doors'. A Zelda-adjacent tune plays when I pick it up, as if the discovery is worthy of ceremony. In a few hours of wandering and getting kicked in the ass by walking bats, I've yet to find a use for it. I keep walking and walking. Night falls and I can't see anything. I don't know how to craft a torch and I'd rather not teleport all the way back to the village just to poke around oblique crafting menus to figure out what components I need that I don't have and don't know how to get. New armor and weapons are probably the key, but a few hours in I've only accumulated a handful of the materials required to make a single piece of gear. It's slow going.

The promise of eventually taming a mount or paying for an eagle ride to some unknown corner of the map would be enticing if I knew there was anything worth finding out there. And maybe there is, but a quick zoom out on the map has me locked in on a no. Cube World doesn't appear to end, the map an infinite scroll of videogame biomes, each region its own pocket of progression—yeah, apparently progress is region-specific. Make it to a new zone and your gear gets downscaled to the level of a new player, like an endless string of lonely MMO starting zones. It's a band-aid for a dearth of stuff to do once fully geared up.

Cube World would have been a novelty at its time of announcement. But now, it's just a boring sequence of low-level questing with some extremely simple crafting systems. Nothing is explained, the world is infinite, the quests endless, and all without clear reason.