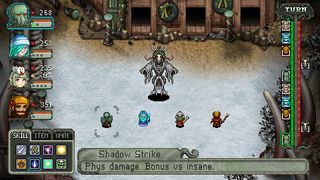 It has been nearly 10 years since Cthulhu Saves the World, and now the dreamer of R’lyeh has awoken once again to save an important thing: Christmas. Cthulhu Saves Christmas is out now, featuring the tentacled old god as he loses his powers (again) and then—I think I’m following this right—teams up with Santa Claus’ granddaughter to stop Jack Frost before Christmas is cancelled forever. Along the way he apparently trashes Krampus, Mari Lwyd, and other “Christmas League of Evil villains” in turn-based combat. He also builds “R’lyehtionship” levels with his friends, which is definitely a jab at the Persona series and folks, I am here for it.

Developers Zeboyd are specialists in the comedy JRPG, but have been out of the spotlight for a while since they wrapped up the series of Penny-Arcade games. They announced Cthulhu Saves Christmas earlier this year. It’s weird to see a pure-parody, comedic JRPG full of in-jokes in 2019, long past the 2008 heyday of internet culture gems like Barkley: Shut Up And Jam Gaiden.

You can check out Cthulhu Saves Christmas on Steam or on GOG, or even go to the Zeboyd Games website. If you buy before January 2nd at a sale price of $8.99, you get a free copy of Cosmic Star Heroine bundled with your Cthulhu.