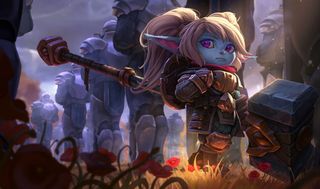 Despite being the largest market for PC games in the world, China's PC gaming scene is also the most heavily censored and regulated. Not only do game developers have to navigate a complicated bureaucracy to get approval to release games, they also have to ensure those games adhere to aggressive rules against violence and gore, spiritualism, and political messaging that isn't aligned with China's communist values.

Amidst a complete restructuring of China's videogame regulations is growing pressure on videogame companies like Tencent to develop systems that curb videogame addiction by imposing restrictions on how often underage users can play games. But against a wider context of sociopolitics is the question of to what extent companies adhering to these government-led restrictions on playtime are strengthening an authoritarian regime.

"For American companies, it really comes down to deciding whether or not you are willing to participate in this type of surveillance," Matt Erickson, the executive director of the Digital Privacy Alliance, told the LA Times. "If they do choose to take part, it makes these companies not unwitting but full-blown accomplices in the Chinese police state."

A recent report in the LA Times focused primarily on LA-based developer Riot Games who is owned by Tencent, China's largest tech company that also owns stakes in gaming companies ranging from Epic Games to Activision-Blizzard. In this report, Riot Games was allegedly pressured by Tencent to develop an "anti-addiction system" in compliance with proposed regulations laid out by China's Ministry of Culture and Tourism last year.

This new system, which is already implemented in the Chinese version of League of Legends, has features that limit players under the age of 18 from playing for more than two hours a day and can also stop players from playing during certain times of day or limit time-based rewards. Tencent isn't the only company to implement these systems in order to stay in the good graces of the Chinese government, though. World of Warcraft's Chinese servers have had playtime restrictions for years, for example.

What's concerning is that these systems require players to enter their national ID (similar to a social security number) in order to verify their identity and track their playtime. It's a similar practice to other Asian countries like South Korea, which also often requires those playing online to link their accounts to a form of government ID (often through the proxy of a cell phone number). But digital privacy activists are worried that the data collected by these systems could be used by China's communist government in nefarious ways, potentially making North American game developers who help build these systems complicit.

"American companies are part of American society and should be institutions that we can trust, abiding by American values," Jay Stanley, a policy analyst at the American Civil Liberties Union, told the LA Times. "If these companies are running overseas and participating in authoritarian regimes, then it’s a real problem."

But that's exactly what American companies outside the games industry have been doing for decades. Even though Google officially ceased operations with China in 2010, it sparked outrage when it was caught working on a censored Chinese search engine last year.

There's an uneven standard for what relationship US companies can have with China. US lawmakers want to stop US investors funding Chinese surveillance tech but seem to have no problem with Chinese sweatshops making shoes used by Ivanka Trump's fashion brand.

Looming over this conversation is China's proposed universal social credit system that punishes and rewards some citizens based on whether they abide by certain rules like not sorting garbage correctly or behaving poorly in public spaces. It's conceivable that, in the future, citizens could be punished by the Chinese government for playing too many videogames since recent regulations reforms make it clear that the government believes videogames are a risk to societal health.

Aside from a few cities independently rolling out their own disparate social credit systems, the universal system isn't implemented yet and won't be out until 2020 (along with its broader mechanisms for monitoring behavior offline)—though it could easily be delayed much longer. Already 17.5 million Chinese citizens have been denied airplane tickets because of their low social credit score from these systems, but many cities in China are also having a hard time getting their residents to care about their social credit score at all.

China and the United States are currently embroiled in an escalating trade war, and while playtime tracking is a cause for concern, there is some imbalance to the way China is discussed in the LA Times story. Despite having the highest incarceration rate in the world, the US is not described as a 'police state' in the context of where companies should operate to remain ethical. Another implication is that, unlike in China, the United States government does not work with tech companies to track people. That is not true: Google works directly with the police, for instance, and an at-home DNA testing company shared genetic data with the FBI.

It is also relevant that developers frequently alter games to abide by regulations imposed by other local governments. Until recently, for example, Nazi imagery was banned from games released in Germany while American-made games released in Japan have also been altered to remove gore and nudity. With European governments taking a strict stance against predatory microtransactions to protect underage players, that a game company like Riot Games would similarly alter its games to conform to Chinese government standards doesn't seem that unreasonable.

As game developers become increasingly global organizations, how games are altered for certain markets and who should have the final say in those decisions is an important question. In the case of China, the answers aren't entirely clear right now. On one hand, the system currently exists primarily to curb over-indulgence in minors. On the other, it could feed into a network of other data that is unfairly used against people—a problem that isn't isolated to China alone.

If you want to learn more about China's complicated relationship with gaming, read my reporting about its booming PC gaming scene and how it's fighting to grow amidst increasing government regulation.