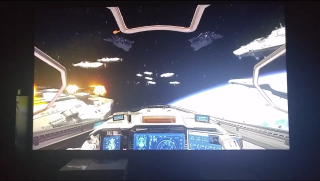 Update: here's the trailer in good-o-vision, on the official COD YouTube account. It reveals that if you pre-order the 'Legacy Edition' of Infinite Warfare, you'll get that recently revealed COD4: Modern Warfare remaster bundled with it.

Well, here it is. A reveal trailer for the teased Call of Duty: Infinite Warfare, now on Hulu, and in a million potatocam YouTube videos, one of which I'll embed below. One suspects this trailer has arrived slightly ahead of Activision's orchestrated marketing schedule, given that the official COD Twitter account hasn't yet posted anything about it, and hurrah for that.

As you can see, COD:IF will be out November 4, and will feature a big battle where an armoured vehicle thingy rolls down some stairs. Also, you'll be able to blast off into space! Fancy that. I should probably write more, but I wanted to post this posthaste, in case it suddenly disappears from the interwebs.