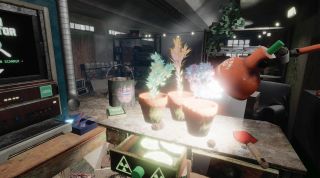 "There is one fantastic story about a botanist called [John James]—the self-described ‘Frankenstein of flowers’,” says Seed’s lead designer, Olie Kay. “He scraped the radium paint from watch dials and used this on his budding roses—don’t try this at home! He said that the best way to dispose of the radioactive material was to simply bury it in the farthest corner of the garden!”

Stories like that completely captured the imagination of Kay and the rest of All Seeing Eye. The small studio’s game, Seed, is a virtual reality project where you can breed and grow procedural plant life, either to complete missions or to enjoy a playful sandbox. As well as appealing to fans of pottering about in sheds, Seed scooped top honours (and $150,000) in a competition held by Wellcome and Epic Games which focused on using scientific ideas in entertaining games.

The concept of garage biotech—where amateur plant breeders were developing their own varieties of plants at home in their own sheds and greenhouses – was introduced to the studio by Dr Helen Anne Curry, a senior lecturer in the history of science at Cambridge University and a key collaborator on Seed. The specific terminology is relatively new—garage biologist, biohacker—but, as Curry points out, there is a long tradition of amateur experimental biology.

Her own interest in the field is rooted in the enthusiasm these hobbyist breeders from the early-to-mid 20th century had for tinkering. “In some cases this tinkering took the form of hybridising distinct types but at other times it meant experimenting with X-rays, chemicals, or radioisotopes in hopes of turning out some unexpected new thing,” she explains. “It was precisely this experience of tinkering with plants, testing out combinations and treatments to see whether they might produce something good, that All Seeing Eye wanted to capture, and did capture, in the game.”

In order to represent plant breeding the developers broke the practise down into simple steps: growing a batch of plants; observing their characteristics; selecting the ones with the most desirable attributes and then going back to step one to grow the new batch using the selected crop as parents.

Extra stages where you can induce mutations or crossbreed plants could be slotted into this basic cycle. The radium-dial clocks actually make an appearance in the game, as does a technique which uses the plant alkaloid colchicine to alter chromosomes.

My own gardening experiments have taught me that sometimes seeds just don’t grow, or they behave in some unexpected, willful fashion. That’s not the case in Seed. “It’s really important that a player’s actions are always positive and that players always feel like they’re making progress. Plants grow quickly and predictably—there’s never any duds or seeds that just don’t grow,” says Kay.

Seeds also grow while you watch. Longer growth was an option but, Kay explains, “The instant gratification of seeing a plant grow before your eyes was really beautiful, rewarding and satisfying for a player.”

Real plant breeding can also be fiddly – seeds can be tiny and processes can involve delicate work using tools like tweezers. In VR, that level of precision would be a problem, so the team don’t design any objects smaller than a ping pong ball. “For this reason, when a player wants to make a new hybrid from any two seeds they put them both in a big microwave-style machine, close the door and press the big green button,” says Kay. “Using the historical material as inspiration to create a compelling setting and story but not being slavish to it seemed exactly right,” adds Curry.

Seed also offers Curry another way to share her research, so I ask what she’s hoping players take away from the game. Broadly, she says that it would be great to encourage players to think more about plant breeding and how it’s done. More specifically:

“It would be great if the mission structure of the game also ultimately led some players to recognise that most of the plants they depend on for food or shelter or clothing or other uses are the products of significant human labour and ingenuity. I think that’s something that often goes unrecognised today.”

A key part of Seed, and one which All Seeing Eye is still currently working on, is how to communicate key information to the player. “In a conventional screen-based game you can pause the action and display a panel of tutorial text to the player,” says Kay. “But if you do that in VR you break the immersion.”

The current solution is a lot of contextual voiceover work as a guide when you start, plus “subtle visual indicators designed to push the player towards certain objects and interactions”. There’s still work to be done on that front, he says, but the approach to imparting that information may have a knock-on effect in Curry’s own work.

“Storytelling is an essential part of historical work,“ she says. “Here the storytelling happens through an immersive experience, including through the players’ experimentation within that experience. This was really eye-opening for me, and it has led me to think more about the ways that I use visual and audio materials, and the opportunities that might exist for me to allow readers or students to experiment and explore within the historical narratives that I have to share.”