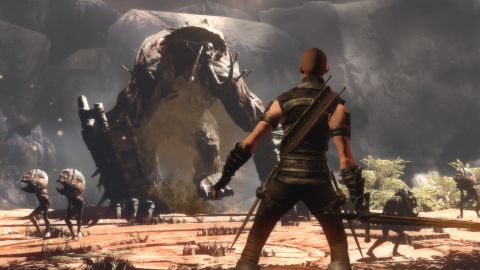 The combat is fun in parts and the characters grew on me, but so much more of Bound by Flame is tedious, frustrating, and unpolished.

The first notes I jotted down as I played Bound by Flame were miserable: “What the hell is going on with the screen resolution? I wish my character would shut her dumb mouth. Oh cool, undead ice guys from the north. Never seen that in a popular fantasy novel or TV series ever.” The most positive thing I wrote was “I found leather under a rock.” Bound by Flame had to grow on me, and it did—but only just enough to keep me from dumping its Steam Trading Cards on the curb and changing the locks.

As RPGs tend to do, Bound by Flame starts with character customization—limited to gender, a few haircuts, and some ugly face presets—and a prologue to establish the apocalyptic plot. Whatever you name her (she's Arya in my game), the protagonist goes by Vulcan. She works for a mercenary group called the Freeborn Blades, which has been hired to protect a group of elder mages. They begin the game performing a ritual that could save the world from an army of undead soldiers called "Deadwalkers," but the ritual goes wrong and Vulcan's mind is invaded by a fire demon. Typical ancient ritual. The possession comes with pyromancy spells, a voice in her head, and the central dilemma: how much do you let the demon consume you in return for its power?

Vulcan and her resident fire demon make a strong case for silent protagonists. Vulcan is unlikeable and stupidly crass, like a child showing off all the swears she's learned, and the demon speaks like a kid who just discovered Shakespearean English. Thou, thee, thine, thy— please shut up.

The other characters are more enjoyable: The Captain, the Freeborn's tough but caring leader; Randval, a charming, single-minded knight; Rhelmar, a sarcastic elf; Edwen, a powerful and mysterious sorcerer; and later on, an undead creature who makes up for his lack of skin with the most personality in the game.

At first, Edwen was my favorite character. Her motivations are never fully clear, even when her identity is revealed, and she's got a sharp tongue that's smarter than Vulcan's. Unfortunately, she's the prime target for Bound by Flame's adolescent sex jokes. She's constantly mocked for her revealing armor, as if chastising her for wearing ridiculous pointy breast plates makes it a funny in-joke instead of a sexist trope. Bound by Flame isn't funny.

Despite the poor attempts at humor and often stupid dialog, I grew to like most of the characters and took the time to ask them questions and take care of their personal side quests. Even Vulcan grew on me as the demon took more control, largely because she started talking less like an angry child and more like an angry AM radio station with poor reception.

The dialogue options are mostly about gaining information and receiving fetch quests, but there are a few important Bioware-style decisions early on as Vulcan either fights or gives in to the influence of the demon, who claims to have the worlds' best interests in mind. A couple decisions were tough to make, and I enjoyed the deliberation.

Strangely, those pivotal moments dry up in the latter two-thirds. I stopped feeling like I could change my path, and my former cohorts grew dull and distant. I had almost connected with them, almost started feeling bad about my decisions, but the emaciated second and third acts feel like an epilogue, where my path is determined and my relationships aren't going to grow anymore, except in moments where obviously foreshadowed plot points need to happen.

In some respects, Bound by Flame uses its budget wisely. Areas are kept relatively small, rendered with a hint of Borderlands-style shading, and in return some of them look great. There isn't a huge stable of monsters, but they're well-animated and I like some of the weirder designs a lot. Outside of combat, character animation is stiff and the lip synching often creates ugly, unnatural grimaces, but that's more easily forgivable than bad voice acting, and most of the acting is passable (I didn't like Vulcan, if I haven't said that enough).

In bigger ways, though, Bound by Flame falls into the gap between what it tries to do and what it can do. The small areas mean that massive battles are only talked about after the fact, a grand and ancient elven city turns out to be a maze of unimpressive streets, and most questing requires running back and forth fighting the same groups of enemies over and over.

Important moments that couldn't be animated are handled by fading to black and then back into the same scene, the characters reacting to what we didn't see, or sometimes not reacting at all. After what should have been a tragic moment at the end of the second act, I spoke to a character ten feet away and he wasn't even aware that it had happened. It also doesn't help that the dialogue captions are full of typos and improper punctuation—even names are misspelled in places, in and out of the game. I got a Steam Trading Card for “Randhal, The Warrior,” for instance, but in the game he's "Randval, The Knight."

Bound by Flame isn't very technically sound, either. It ran fine on my GTX Titan, but on a Radeon HD 5970 it kept downsampling and putting a black border around the screen for no apparent reason. I had to play it in windowed mode, where it crashed instantly if I minimized the window. The framerate stayed at a solid 40 on the HD 5970, at least, and a solid 60 on the GTX Titan, though it was stuck there with no option to turn off vertical sync. I also encountered a few bugs: I had an entire conversation with a character while facing a different character, and the voice audio sometimes skipped lines.

The best part of Bound by Flame is the action RPG combat, but it's only as good as the enemy design and balance, and the enemies are only any good in the middle of the game. In that middle section, I enter a zone where I'm swinging, parrying, riposting, dodging, and spell casting with confidence and speed.

There are three paths: heavy weapons and blocking, daggers and dodging, and pyromancy spells. I focused on the heavy weapons stance, where I can swing my sword with the mouse buttons, enter a blocking position with space, parry and counter-attack by hitting space in time with an enemy attack, and kick to disrupt enemy blocks. When I'm using all that in fast, complex sequences, combined with a crowd control fire spell that shoots out a 360-degree wave of knock-back flame, crossbow bolts, and explosive traps, I feel both powerful and challenged.

It's an intuitive system which rewards careful timing and combos, but doesn't punish you for changing your mind to react—the animations are easily interrupted to block out of a swing, or cancel a spell into a dodge. It's especially fun in a couple one-on-one duels and against mid-game Deadwalker troops, but boring, overpowered enemies ruin it everywhere else.

Vulcan's health and mana reserves are pathetic for the first half of the game, and new weapons and armor are scarce. With so little mana during those first several hours, spells are useless, and the early swamp enemies have such a simple attack, wait, attack pattern that all I can do is block, attack, block. It's boring, and frustrating when foliage obscures my view and screws up my rhythm.

It's not any better when I meet a more complex miniboss near the middle of the first act (see the video below), where I succeed by tricking the AI into getting stuck in an easily-dodgeable attack pattern while I regenerate health. Once he starts whacking the ground to attack me with sprouting vines, I run back and forth behind him casting my wimpy spells and he never stops until I break formation. It's effective, but boring, and boss fights throughout Bound by Flame go roughly the same way. Even if their AI can't be exploited, it's still about running around avoiding damage, harassing with quick swings, ripostes, and spells, and then running around some more to regenerate health.

At the end of the game, I'm still enjoying scraps with lesser minions from the middle act, but minibosses repurposed as common enemies remain just as tedious as when they were introduced, and the final boss fight could really have used some checkpoints. It's also annoying that I can bring a companion with me, but they're almost totally useless. Thanks for getting backed into a corner and dying almost immediately, Rhelmar, you're a goddamn hero.

Except when it hits that central sweet spot, Bound by Flame is often frustrating and tedious, and the last half of the story feels rushed and carelessly planned. Still, it grew on me. It's a genuine effort, and I appreciate how much it wants to be a memorable and weighty RPG, even though it isn't.

But even though I found it strangely addictive, nothing—not the music, the sound design, the characters, the story, the sets, the leveling system, the combat, the boss fights—deserves any great amount of praise on its own. As a whole, Bound by Flame has enough appeal not to be dismissed as a total waste of time, but I would only recommend it at a quarter of the current asking price, and only then if you've exhausted every other good, modern fantasy RPG.

The combat is fun in parts and the characters grew on me, but so much more of Bound by Flame is tedious, frustrating, and unpolished.