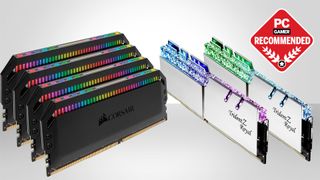 When picking out the best RAM for gaming, it really helps to have a guide. It’s easy to look at lists and lists of DDR4 at retail and just pick one that offers a good amount at the right price. But it turns out that buying RAM is just a little more complicated than that.

You don’t just need more memory to upgrade your machine; you need faster memory, too. Using high-quality DDR4 with a high clock speed is just as important as the sheer amount of memory. Case in point, our high-end PC build template only calls for 16GB of RAM. The extreme build calls for 32GB. In both cases you may notice that we’ve called for G-Skill memory, one of our faves, with a 3200Hz clock speed. In general, we’d recommend opting for getting fewer GBs of 3200Hz DDR4 regardless of what spec you’re building to. Faster memory makes for a faster machine, which makes for faster, smoother running video games. 16GB is plenty sufficient for most rigs, but if you're wondering how much RAM you actually need, you can read further here.

If you want to go deeper, you should also look at the Column Access Strobe Latency (CAS for short). CAS latency is a rating that quantifies how long it takes for memory to switch from one task to another. Since we’re talking latency, you want the lowest possible number. (Right now, a great pick normally comes in at 15 nanoseconds, though anything from 15-18 is very strong.)

Last, but not least, if you have frosted glass on the sides of your PC, high-end memory is a great way to amp up your PC’s internal light show. Many of our favorites have RGB lighting, so they look as good as they compute. That said, we also have some lighting-free options if you prefer to keep your enclosure out of the public eye.

The best RAM for gaming

Corsair has outdone itself with the Dominator Platinum RGB. The original DDR4 kit has been our favorite high-end memory bundle for quite some time now. Its sleek exterior, patented DHX cooling technology and unrivaled performance have made it a formidable flagship over the years. Now, the iconic Dominator Platinum is back with a stealthy new design and Corsair's new Capellix LED technology.

The price doesn't differ too much from the original, non-RGB Dominator Platinum, but you’re still paying a hefty premium compared to some of the other kits mentioned in this guide. We still think it's well worth every penny if you can afford it.

The best RAM for gaming for those that prefer a lightshow

Light up RAM modules have been around for a while, and RGB-enabled options are now commonplace. G.Skill's Trident Z RGB is one of the most tasteful implementations of RGB lighting we've come across. The kit illuminates itself with five individually addressable RGB LEDs and a frosted diffuser that produces a soft glow that looks fantastic in just about any PC build.

The memory performance is just as good as the looks, with the Trident Z line available in speeds ranging from 2400 to 3600, and more. Overclocking performance is in line with other Trident memory, and with tuning and tweaking you can usually squeeze a couple hundred more MHz out of the kit. The Trident Z RGB line is well worth consideration for any build.

The best RAM for gaming for fully customizable RGB

If you're into personalizing and modding your PC, Crucial's Ballistix Tactical Tracer RGB series is another worthy option. Available in 16GB-64GB configurations at 2666MHz and 3000Mhz, the latest Ballistix DDR4 memory is suitable for a wide range of builds without much of a premium. The main selling point here is the kit's 16 addressable RGB LEDs with eight controllable zones and an easily removable light bar that diffuses and enhances the RGB effects.

Crucial provides free 3D files that allow you to print different light bars to produce a wide range of aesthetics for any build. Power users can modify existing files to print their own gamer tag or custom designs. Alternatively, you can remove the light bar altogether for a blindingly bright effect. The Ballistix Tactical Tracer RGB provides the customization G.Skill's Trident Z RGB series lacks, and when you look at the advanced software and possibilities that come with the Ballistix kit, it's easy to see how this is a top choice for PC modders.

The best RAM for gaming for mid-tier machines

The G.Skill Ripjaws V is the second generation of DDR4 memory from G.Skill, and it's clear the company listened to the feedback and criticisms from the customers. The new series is more affordable, faster, and has a less tacky heatsink. We found the 16GB Ripjaws V kit to be the best option for a decent capacity kit that features great performance right out of the box.

Immediately without any overclocking the Ripjaws V did exceptionally well in our benchmarks, beating several kits in the 2400 MHz range. Despite this, you can still achieve an overclock to 2800-3000MHz with a simple bump in voltage. You might even reach 3200MHz or higher, though you're likely to hit some stability issues. With a reasonable price, whether running stock or overclocked, G.Skill Ripjaws V is hard to beat.

The best RAM for gaming for those on a budget

The Patriot Viper Elite 8GB may not be the cheapest DDR4 memory bundle you can find, but in our opinion it holds the best value when you're on a budget. This dual-channel kit is priced lower than competitors like the HyperX Fury and Corsair Vengeance LPX while also offering similar levels of performance. And unlike cheaper kits, the Viper Elite features decent heatsinks and overclockability.

For those looking to take full advantage of what the Viper Elite has to offer, simple overclocking pushes its performance to match that of much more expensive options. One of the awesome things about DDR4 is that it generally operates at 1.2V, and even the slightest voltage increases can give you quite a bit more clockspeed while still remaining cooler than DDR3. We hit 2800MHz and 3000MHz speeds with ease, and 3200MHz is possible.

Dual In Line Memory Module, the physical slot on a motherboard (actually a small circuit board itself) where RAM is inserted.

Error-correcting Code Memory, RAM capable of automatically detecting and correcting errors on the fly, generally used in highly sensitive applications, like scientific data collection or banking. Typically only used and supported on servers and workstations, though most desktop boards can run it as non-ECC.

The measure in MHz of how many commands a RAM kit can process in a second.

Column Access Strobe Latency, the delay between the memory controller requesting data from the RAM and the data being available; the first number listed in a kit's timings.

The measure in number of memory clock cycles that an operation requested by the memory controller will take for the RAM to complete. Lower is generally better.

eXtreme Memory Profile, instructions for the BIOS that tell it what frequency, timings, and voltage to activate RAM at simultaneously, a shortcut for overclocking without tinkering with each setting individually. Officially for Intel platforms, unofficially many AMD boards readily support reading XMP data (though it may go by another name like A-XMP or DOHC).