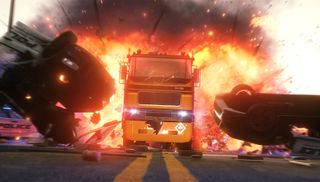 Battlefield 4's disastrous launch invited early skepticism, but Battlefield Hardline seems to be coming along since we last saw it, bringing with it a much more frenetic pace than the series is used to. With the imminent launch of a beta in the lead up to Hardline's March release, I sat down with Senior Producer Scott Probst and Senior Multiplayer Designer Evan Champlin to talk how Visceral has transferred Battlefield's established military setting into a cops-vs-robbers environment.

The main talking point is the new Hotwire mode, a ridiculous domination mode in which players vie for control over a handful of vehicles. It's in keeping with the studio's mission to inject a greater sense of speed into Battlefield, though no fighter jets will feature in this installment. You can see Tyler play the beta over here.

PC Gamer: Did the transition from the typical military setting to the cops and robbers setting present any interesting challenges in terms of the way maps are designed?

Evan Champlin: We had to understand the technology first, but also the philosophy of previous Battlefield games before developing our own. Because, you know, Hardline’s rock paper scissors are dramatically different to Battlefield 4’s. We have a lot more focus on transport vehicles, things that go super fast, and we had to account for that in our level design.

Did you encounter any roadblocks when designing for the new setting?

Scott Probst: I wouldn’t see anything as a roadblock. I almost think we had more opportunities than we could imagine. When we started talking about cops and criminals in the Battlefield world we thought we could go anywhere. It was more a question of what’s the time we have and what are the cool things that are going to boil to the top to make the best game possible.

There were a lot of discussions where we had a plate of spaghetti worth of ideas and we had to say, “Okay, what are the coolest things and what really stands out and let’s go after those things”. I don’t think it was about limitations, it was more about discipline.

You said before that speed is one of the core pillars of Hardline. Over the years a lot of FPSs have slowed down, especially those with military settings. Given that you’ve got infantry in the same playing field as hotted-up cars and helicopters, how does that balance out in the way the maps are put together?

Evan Champlin: It was definitely a challenge because we have vehicles that are three or four times faster than all the ground vehicles in Battlefield. So the trick was to design maps that have long enough open spaces where you can really feel the speed of vehicles, where you can open up and go full speed, and have opportunities where two cars can be next to each other, rubbing paint, or three guys hanging out of windows shooting each other. So the trick was looping vehicle flow and then having interconnected infantry passes that allowed you to circumvent that, or shortcut your way past.

We also slightly increased the player speed too, which helps a little bit because you can now compete a little bit more [with vehicles]. As an infantry player you can say “that guy [in a vehicle] is going around that turn, I’m pretty sure he’s going to be making this next turn, so now I can cut through this space and be there to meet him.”

What’s the thinking behind having a beta so close to launch?

Scott Probst: There’s a few different thoughts behind it. From an engineering perspective, making sure everything is functional and that the whole backend works on all the different platforms is one, and making sure people are able to get into the game and that it’s a stable and fun experience.

From a design perspective a lot of it is about validating the design that the guys have gone and built, and making sure that the game modes, the player progression, the weapons and the gadgets are a fun and balanced experience. Then I also think it’s about looking at the data that comes out of the beta and seeing whether there are any last minute tweaks we can make based on the experiences people are having, like if someone finds a weapon that’s OP, or if there’s some player progression adjustment we want to make. [We want to] take all that into account and fold it into the game before it releases.

In the event that you do notice a fatal flaw during the beta, what happens then? Will the game be delayed?

Scott Probst: I don’t think there’s a world that exists where the game gets delayed. I also hope that we don’t find anything that’s fatal like that. In the event that we do, I think that we’ll find time to address whatever we do find. So if there’s anything that comes up that’s like “oh, that’s not good” we’ll find a way to fix it.

Both your publisher and Visceral have learnt from Battlefield 4’s dilemmas, but do you think it’s even possible to release a bulletproof software product in 2015?

Scott Probst: I think it’s a big challenge. I don’t think I’d call anything bulletproof, because there are always exploits and things that can be found and ways things can be broken. I think the important part of it is to be aware that everything isn’t bulletproof. By acknowledging that we can pay attention to the issues that are being found and go after them, as well as interact with the people who are experiencing them so we can listen and understand their problems, and ultimately fix them.

If we were to say “this thing is bulletproof, it’s ready to go,” that’s the wrong approach to take. At the end of the day there’s going to be millions of people playing the game and I’m sure people will find things that we haven’t found yet. The important part is that we’re going to be paying attention, and we want to speak to each and every one of those people in order to solve it.

I had the opportunity to play the single-player component a few months ago. Has the hard-boiled, black humour approach influenced the multiplayer? I ask because Hotwire is amazing fun but it’s nonsense, isn’t it? There's no justification for it in the fiction.

Scott Probst: [laughs] I think when it comes to multiplayer the focus is absolutely on fun. The handcuffs come off a bit in relation to the story because multiplayer is more about getting into the action and having a good time. With that said, I think the people who have written the game and paid attention to the dialogue have actually done an excellent job in multiplayer, bringing some of those elements across. You’ll hear cool voice over and snappy dialogue between characters. It feels like it’s cops and criminals banter. So I think that stuff does come across, and the more you play it the more it comes out, it’s just not as scripted and heavy-handed.

Will there be fighter jets and water vehicles in the multiplayer?

Evan Champlin: We do have some water vehicles in there. We have a couple of speed boats and gun boats. There are a couple of other water vehicles like air boats too. As far as jets and stuff goes, no. We felt that was a little too far from the fantasy. Over the course of development we played with a lot: we’d push the meter in both directions to hone what Battlefield Hardline was, to make sure we were bringing in the Battlefield experience but also changing enough to make Hardline unique. So it was just a little too far.

Scott Probst: One of the interesting points is that we actually had jets at one point, and we put it in front of the Game Changers [Visceral’s internal playtesters comprising veteran Battlefield players, YouTubers etc.], and everyone was like “that’s not really your thing”. In the package we were putting together with Hardline they said they really shouldn’t be in there. It was kinda split: some people wanted them and others didn’t, but in the end we did what was right by the players because they said it didn’t fit. They said that if we were to take them out it’d be better. So we removed them and they were right.