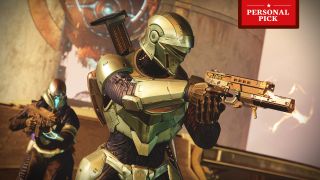 Part of me wishes I could quit you, Destiny 2, but I can't. This year you split from Activision and reinvented yourself as a free-to-play game, but that didn't change much really. You're still a compelling shooter with beautiful sci-fi art and glorious futuristic guns. You're still a great social game with smart raids and some decent PvP Crucible modes. You're still the game I boot up after the pub to hang out with friends and shoot aliens until the early hours.

I admit I've been cynical about the idea of a 'service game'—an evolving entertainment platform that you can return to every week to find something new. I worry that the rewards for successfully developing a service game discourage publishers from backing great singleplayer games. A few games have shown me how good the model can be, however: Warframe, Fortnite, and Destiny 2.

This year Bungie has moved from a traditional expansion model—which created doldrums periods between releases—to a purely seasonal update schedule. Each season adds new weapons, a new mode, PvP crucible updates, and lots of little quests to grind out. Part of me craves new environments and enemies (sure to come with the next major expansion, but will it be Destiny 3?) but there's enough there to encourage me to suit up my Warlock, raid my gun locker for some old favourites, and fly around the solar system destroying hopelessly outgunned aliens.

Right now players are feeding resources to space cannons to charge a giant time machine on Mercury. This is a very Destiny thing to do. The game does a good job of dressing up its grind in cool space nonsense, and I love it for that. The seasons are enhanced with week-long events that transform the tower hub and give you even more space debris to grind for. The Halloween event, for instance, invites everyone to wear masks of their favourite Destiny heroes and villains.

Almost every week when I log on the game gives me a message giving me a heads up for the wild new events that are about to land. It has taken a while for Bungie to reach this cadence, but I think it suits the game nicely, even as we keenly wait for the next massive update. Bring on those big evil pyramids!

It's simply a gorgeous game to look at as well. I struggled to sit with The Division 2 because I missed Destiny's vivid, brightly coloured universe. Military fatigues seem so dull when I can wear a hat moulded from the skull of an ancient space dragon. Also I have a gun that fires a billion bullets a second and auto-reloads when it gets a kill. Sometimes I go into the bowels of the moon just to kill a bunch of Hive in seconds with my Huckleberry.

The sandbox supports many pleasures. You can collect, compete, and co-operate across dozens of different challenges. The raid-like dungeons Bungie has added in the last year or so have been great, and raids are still some of the most fun you can have with other players on the internet. I can't wait to see what Destiny does next.