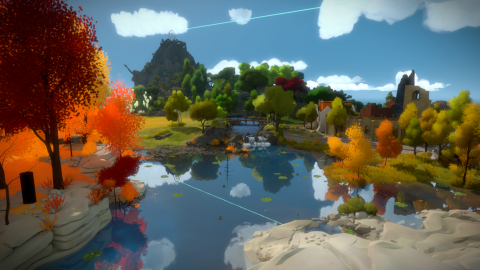 Blow does it again. Exquisitely layered puzzles populate a world that will keep you guessing.

What is it? A series of increasingly complex maze puzzles, set on an idyllic island.
Expect to pay: $40/£30
Developer: Thekla Inc
Publisher: Thekla Inc
Reviewed on: i5, GTX460M, 4GB RAM
Multiplayer: None
Link:Official site

What do all games have in common, other than the bare fact of their interactivity? There are many answers, but the one I'm most convinced by is that all games are teaching mechanisms. Whether it be slyly illustrating a language puzzle in Fez or telegraphing an attack window in Dark Souls, every game must instruct you about the tools at your disposal—and far from being a technicality, this creates a sense of intellectual intimacy with a creator that few artforms can profess. Talentless creators teach with HUD prompts or via cajoling NPCs, often wresting control away in exasperation when you fail. Skilled creators hint and tease, insensibly guiding you towards a solution. The clue could be something as innocuous as the movement of water, or how an object looks at a distance.

Though not without its flaws, Jonathan Blow's The Witness is one of the finest teachers I've studied under, and if you're at all minded to play it you should stop reading now and do so. Yes, that's a terrible reviewer's cop-out, but the joy of The Witness is simply how you learn, and while I can dance around specifics, I'd hate to deny you a single particle of that satisfaction. Is the price tag a concern? Well, it took me 30 hours to polish off the main arc of the game and I managed to bypass large tracts of it, including several unlockable areas and scores of puzzles. So if the bang-for-buck ratio is of paramount importance, I'd say you're covered.

Still here? OK, you can't say I didn't warn you.

The Witness is a series of maze puzzles (some 600-odd) set on a tropical island—a sumptuous, thickly hewn expanse of cliffs, meadows, orchards, swamps and sand, dotted with buildings such as a church, a logging depot and a windmill, many falling into disrepair. The place is a regular car-crash of eras and traditions, from the vaguely Japanese temple near the centre with its plush red shutters, to the rusting tanker shipwrecked on the northern coast. But there are shared themes, amongst them a motley and unnerving population of stone effigies—priests, kings, guitarists, photographers, rock-climbers and more, all frozen mid-gesture like trolls caught in the sun.

And of course, there are the omnipresent screens that house the majority of the puzzles, bright blocks of colour you'll spot through gaps in the foliage or at the crest of a distant hill. These puzzles are arranged into loose, area-specific sequences that share a particular mechanic, each completed puzzle sending a bolt of power to the next one along. The further you push into the game, however, the more these puzzle mechanics begin to combine, till by the climax you're using the full set to unravel enigmas that would have seemed impossible hours before.

The silent elegance with which The Witness cultivates your understanding in this way, the artfulness with which it feeds you concepts and layers them up into complex problems, is where its greatness lies. Early puzzles are painless—you hold-click to zoom on a screen and activate a cursor, then draw a line through a grid layout from start to finish. But then you start to encounter symbols on squares within each maze that impose additional requirements. These are commonly introduced via banks of five or more screens that walk you through each facet of the new mechanic, beginning with a maze that's a square or two wide to demonstrate the basic principle. Beyond a couple of text prompts to explain the controls at the outset there isn't a breath of actual exposition in the game. It simply doesn't need it. The pedagogy is that accomplished.

That's not to say that The Witness is a breeze. On the contrary, it's one of the toughest games I've played in years. The premise of each puzzle may be digestible, but the devil is very much in the detail. It's also easy, while roving the island, to run into a conundrum you lack the knowledge to solve. But you're never forced to tackle things in a certain order, and it isn't necessary to work your way along every thread in order to reach the finale. The ambiance is also immensely restful: there's no real score, just the seethe of wind in the canopy and the lilt of flowing water, and the views are captivating. The scenery might seem a distraction, but this would be a much less enjoyable game were it not for the opportunity to take a break in a clearing and watch the clouds pass by.

The landscape is also more than it appears. As time goes on, you'll pick up on a delicate negotiation between the screen puzzles and the geography and architecture that surrounds them. There are puzzles that mimic shapes nearby, such that to solve them is also to create your own little artworks—a quietly significant invitation to collaborate in the world's making. There are puzzles that are effectively diagrams of the machines they’re tied to—I might trace the shape of a motorised stairway in order to lower it, while contending with the rules of any symbols on the board in question. There are tricks of perspective that feel decorative at first, but which actually supply clues about the strategies that hold sequences together. And there are puzzles that require you to actually use the environment itself in some fashion to proceed, a revelation that depends on your having soaked up enough of the game's visual language that certain things begin to stand out. These latter discoveries are among the most delightful The Witness has to offer.

There are, alas, a handful of puzzles that aren't so gratifying. The Witness falls slightly afoul of the classic endgame dilemma—there's a point where you stop learning, stop working out how to employ the techniques you've picked up in different contexts, and the challenge becomes too much a question of overcoming artificial obstructions. As with the arrival of a bullet-sponge boss in an FPS, it's all about having the patience to proceed rather than the ingenuity. This is balanced out by a couple of masterful (and insanely hard) specimens and by some opulently weird interiors, but it's sad nonetheless that the closing sections aren't quite the send-off the game deserves.

There's also the storyline—or rather, the mass of oblique audio recordings and suggestively positioned objects that could form a coherent storyline, assuming they aren't the trappings of a non-narrative thought experiment. Even making allowances for not uncovering all the secrets, it's difficult to draw conclusions because at the time of writing, key elements of the fiction aren't in the game—though playable from start to finish, the review build lacks a number of more explicit audio files and has non-final endgame sequences (it's also a bit buggy, with some mild glitches on things like reflections and at least one documented crashing problem). But I'd hedge that The Witness is, at least in part, an attempt to map and celebrate the sheer act of composition. It's a journey to the heart of its creator's artistic process: the business of getting from A to B positioned as a model for cognition itself.

Many of the recordings are excerpts from canonical texts of science, philosophy and literature—you can look forward to Paul Cezanne's meditations on the relationship of painting to nature, and B.F. Skinner's remarks on who really wields the power in a game scenario—player or designer? It goes without saying that The Witness is highly aware of its own artifice, but this isn't sprung on you, as in other games, in the form of a plot twist or “meta” in-joke. It's tacitly advertised from the outset, freeing up the rest of the game to explore the implications.

You're left with a mirror-tunnel of allusions and surmises that is undeniably thought-provoking, but may daze and annoy as many players as it beguiles. Mind you, it's perhaps to the purpose that you're asked to make sense of it all. I introduced The Witness as a teaching machine, but I suspect Blow's agenda is to collapse the master-student relationship, equipping you with the tools and insights you need to approach the game's sources of inspiration on your own terms. The Witness might be constructed around mechanical challenges with unambiguous outcomes, but as the choice of title implies, what it ultimately seeks to offer is a vantage point, a perspective on life's mysteries, rather than answers.

Blow does it again. Exquisitely layered puzzles populate a world that will keep you guessing.