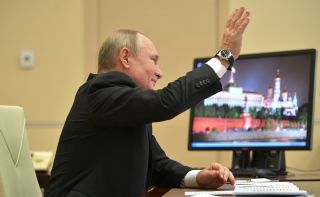 Security-conscious Russian president Vladimir Putin has not heeded Microsoft's advice to stop using its obsolete OS, apparently continuing to use Windows XP in the Kremlin and his official residence. Fair play, Vista was terrible, but it's been years. Time for an upgrade.

Russian website Open Media noticed Putin using the OS in official press shots, as if he had no shame whatsoever. While government officials and agencies often end up getting stuck with outdated technology because of budgets and bureaucracy, the lack of support makes XP a potential security risk, and in 2014 US government staff were warned to stop using it.

In Russia, however, it's even more of a hassle to update to a new OS. Officials aren't meant to use foreign software, with Windows XP apparently being the last OS certified for use within the government. Windows 10 can be used on machines that don't contain state secrets, but on other machines the only option is to stick with XP or switch to a brand new, Russian-owned alternative.

In 2014, government agencies in Russia were warned by the Federal Service for Technical and Export Control that support was ending and that they should start to transition, by 2016, to another operating system. But it looks like Putin is still using it in at least two places, more than three years on. He is pretty averse to the internet, however, so it's probably not a security risk.

The Russian government was meant to make a switch to the Russian Astra Linux OS, but that plan was postponed because the software wasn't ready, so Windows XP remains. Apparently the goal is to have 80 percent of PCs running Astra Linux by the end of this year.