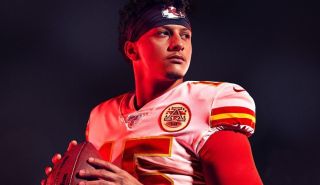 Well my Super Bowl 'simulation' using a 1987 DOS football game couldn't have been more wrong, but I wasn't the only one whose prediction failed. The dreaded 'Madden Curse' tripped over its own feet and landed face-down in the turf as well, leaving the Super Bowl winning Kansas City Chiefs quarterback Patrick Mahomes and EA Sports both asking: "What curse?"

The Madden Curse is a superstition that every football player whose picture appears on the Madden NFL box will befall some injury or bad luck or poor performance that same year, and they certainly won't win the Super Bowl. It's all a bit silly—players are picked to appear on the Madden box because they've had a stellar season the year before, so it's not exactly likely they'd have an even better season the year they appear on the box, right?

However—with one technicality we'll hit in a moment—there's never before been a player featured on a Madden box who has gone on to win the Super Bowl that same year, until now. The sort-of exception: New England Patriots tight end Rob Gronkowski appeared on the box in 2017, was plagued with hamstring and back injuries and only played 8 games in the season, and he missed the Super Bowl entirely—though the Patriots won without him on the field.

Does that even count? It doesn't matter now, because the curse is officially over:

There have been a number of notable injuries for players appearing on the Madden box that led to the idea of the curse. Michael Vick appeared on the box in 2004, but missed his first 11 games due to a pre-season fibula injury. Donovan McNabb suffered a groin injury during his Madden year and didn't make it past week 9. Daunte Culpepper graced the box in 2002 and suffered a knee injury that ended his already lackluster season early.

Even Mahomes seemed doomed to suffer the Madden Curse for a while—he suffered a dislocated knee in week 7 of the season, and even after his quick recovery, he wasn't looking especially hot in the Super Bowl last night, throwing two interceptions while trailing the San Francisco 49ers by 10 going into the 4th quarter.

But the Chiefs pulled out a win, so we can finally consider the Madden Curse broken. Or, better yet, consider it a silly superstition altogether. Or maybe we can note that Madden finally coming to PC in 2019 is the reason the curse was broken just a year later? Let's go with that. PC gaming destroyed the Madden Curse once and for all (with a little help from Mahomes and the Chiefs). Thanks, PC gaming!