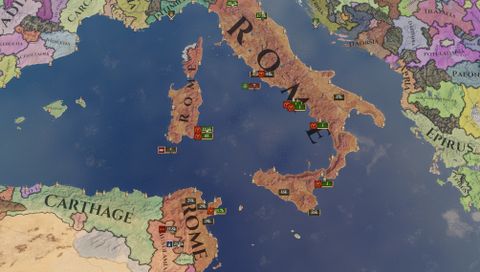 Huge, inventive and the reason I'm sleep deprived. It's brilliant.

Running a nation is dirty work. It necessitates bribery, blackmail and occasionally spreading fear. You're a parent, essentially. Imperator: Rome is Paradox's latest grand strategy game, this time serving as a window into antiquity. You can pick a nation from the classical era and then paint the world one colour: yours. Supporting all that lovely global conquest, however, is one of the best internal politics systems the studio's designed, and one driven by characters. Assholes, every one of them.

Imperator is a follow-up to Europa Universalis: Rome, Paradox's attempt to shake up the series' broad grand strategy formula with some features from the original Crusader Kings and Victoria. The concept is largely the same, this time uniting systems from the most recent games, yet Imperator is more evolution than spin-off and more cohesive than a 'greatest hits' compilation.

While you play a nation rather than an individual, your empire will still be full of them—ambitious, bickering aristocrats, all grasping at power, wealth and, judging by how often they die in flagrante, sex. They belong to families of varying importance and can act as generals, politicians and researchers, and while you have some control over them, they can push back in moments of unexpected autonomy. They are essential to running the nation, but they're also constantly clogging up the works with their plots and personal armies. They have aged me, but I still love my terrible Roman children.

Republics like Rome are mutable but also full of rules. They have elected leaders and several different factions vying for power, giving you bonuses and occasionally penalties when they're in charge. Each faction has its own objectives, but then all the senators and faction supporters are people with their own ambitions and grudges. Every diplomatic decision has to go through the Senate first, potentially stopping you from starting a war if the votes don't swing your way. You can also act the tyrant, and maybe push it through, though that won't go ignored. It's one of several ways the game tries to limit the power you can exert over your empire, but rather than stopping you from throwing your weight around, it makes the journey to reach the objective more memorable.

Trying to juggle these ladder-climbers can be a monumental, messy task, but it's the source of brilliant emergent stories and engaging leadership conundrums. When the Senate shot down my proposed war, I found myself transformed into a detective hot on the trail of a corrupt politician, poring over charts and character sheets to find ways to appeal to the nays. I discovered that the head of the Populists was feuding with the Consul, Rome's leader, so I ended up playing matchmaker, as well as buying him a tiger, all so I could get his support.

You're trying to build this efficient machine, but the distractions and fires never stop, and concessions are inevitable. You might not want to make a racist, lecherous 70-year-old a governor, but maybe you owe him favours, or he's raised an army and is willing tear the country apart to get power. Inaction, assassination or capitulation all have consequences. Imperator thrives on this stuff, and frantically putting out fires and wrangling nobles is the best part of the job.

This sort of autonomy conjures up lots of surprising moments. During a war with Carthage, when I was focused on North Africa, I somehow completely missed a naval invasion. Sick and tired of my ineptitude, one of the nobles raised an army of his own and met the Carthaginians just outside Rome, saving the day and stealing my thunder. Another asshole.

Monarchies don't have troublesome politicians, but running one comes with other wrinkles. They're more vulnerable, with most of the power being held by the royal family. If a republic loses a senator, it's a loss it can take in its stride, but a Macedonian prince is more costly. I found myself becoming a bit more invested in them, and while Imperator is not an RPG like Crusader Kings, there are moments with monarchies where the distinction might as well be meaningless. You can get hitched, become embroiled in plots and fight off usurpers, even though you're technically playing a whole kingdom.

Tribal nations can be tricky to manage. Their leaders have to rely on influential tribal chiefs that keep their own armies, and in most cases they start out small and poor, though often they're surrounded by lots of opportunities for expansion. They're perhaps the least developed of the bunch, yet there's still a lot going on, from managing migrations to uniting everyone against the superpowers. Rome and its rivals are the stars, but go off the beaten track and you'll find plenty of diversions.

No matter who you play, there are certain constants: you'll need to pass laws, appeal to the gods, develop your nation's infrastructure in countless different ways and crush rebellions. Praying to Ceres (by spending religious power, as the ancients did) will net a bonus to population growth, while building more marketplaces will generate more taxes. Then there are the faceless masses to manage—your citizens that generate research points, your freemen that give you more manpower—all with their own religions, cultures and level of happiness.

Imperator is overflowing with information on the most granular stuff. Exploring it is confusing at first, but then you start to see how all the stats and crises fit together, leading you to a solution over the course of multiple menus. I love it, but it can also be frustrating. With a tutorial that glosses over most of the important features and no help system, you've got to figure out essentially a foreign language—especially if this is your first Paradox game—all on your own. There's no dearth of detail or tooltips, but sometimes it's so condensed that the explanations can get lost in translation or skip over key bits of information.

It's a lot, but everything you build and tweak is connected to one of the game's pillars, like creating more fodder for your armies or fattening up your bank account, and eventually starts to make sense. You need a bigger army? Build more training camps and get more freemen. Broke? Hike up taxes and build more marketplaces. And you can make lots of changes very quickly. Alternatively, you can go through each province individually, fine-tuning them, moving people between cities, endlessly tweaking until it's 3 am and when you close your eyes all you can see are demographics. And then you make a mistake and you've got a revolt on your hands. It's great.

Imperator's wars are some of Paradox's best. Once you've fabricated claims on provinces and found an excuse for war, you can start marching your troops across the border towards their objective. That's more complicated than it sounds, however, because Imperator's map is full of obstacles. Weather, rough terrain, fortresses—they'll inevitably cost you battles. There are bottlenecks and dead ends and whole regions cut in half by massive mountain ranges, making planning your army's journey all the more essential, as well as building roads and defences around the geography.

You can recruit 12 different types of unit, but they're only available if that city has access to a specific resource. You need horses for cavalry, iron for heavy infantry and obviously elephants for war elephants. To make your perfect army, you'll need to expand and trade. Composition matters, too, as it makes your battle tactics more effective. These can be selected before battle, each with their own benefits and counters, but picking the right tactic won't mean much if you don't have the appropriate units to back it up.

Coupled with returning complications like supply limits and army morale, the additional attention given to warfare means that Imperator ventures into wargame territory quite a lot, and largely with success. It's more tactically rich than most of its predecessors and less abstract, but it manages to avoid crossing the line from complex to needlessly complicated. The AI is less aggressive and expansionist than I'd expect, but this gives you more space to deal with all the internal conflicts. It ultimately balances out.

Imperator is a meaty game, but it still feels like there are some gaps. Navies are a bit ignored, for instance, lacking the tactical options of ground units and limited to a single type of trireme. There's just not much for them do to beyond ferrying troops and occasionally chasing pirates. Imperator has a lot of water, so it would be nice if interesting things happened there. Thankfully, there's apparently an update on the cards that aims to tackle boats.

While there are lots of playable nations, only a handful seem to have been given the bespoke treatment. Each of them will keep you busy for an extremely long time, but there are definitely places where I could see an expansion fleshing areas out, particularly the migratory and settled tribes. It's still audaciously large, however, and ridiculously time consuming.

But what's the point in time if you can't spend it turning a once mighty empire into a subservient client state or dabbling in a spot of court intrigue? I've spent whole days (and countless in-game years) invested in wars and plots, some ending less favourably than others, but Imperator is endlessly fascinating and I expect to be digging through it for ages.

Huge, inventive and the reason I'm sleep deprived. It's brilliant.