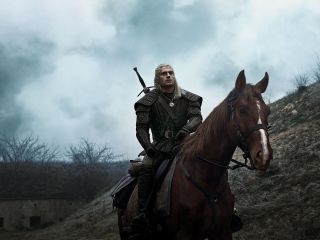 Netflix's The Witcher series has wrapped up filming, but despite a trickle of on-set photos and casting shots, we still haven't seen all the characters who will appear in the show. Today we get our first look at someone we've all grown to know and love: Geralt's faithful mare, Roach.

Netflix's NX account tweeted the photo today. "You begged, we delivered," they said. Included in the tweet is a production still of Geralt astride the noble steed.

You begged, we delivered. Here’s your first look at Roach! #TheWitcher pic.twitter.com/Ll3LWtWcg7July 16, 2019

She's a beauty, isn't she? Ears up, she's paying close attention to her job. That's more than can be said for Henry Cavill's Geralt, who appears to be wondering if he forgot to turn off the stove before he left this morning.

Since this is just one still photo, we don't get to see many of Roach's abilities here—she's not standing on top of a roof or hiding in a goat pen. But the show is in post-production now, so it's likely they're adding stuff like that in as we speak.

I'm sure Roach would be pleased to know that fans have welcomed her with open arms.