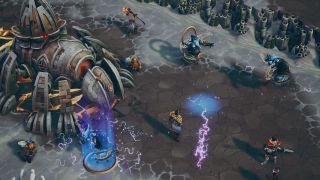 It's not a great time to be itching for a new real-time strategy diversion, unfortunately. There was the disappointing launch of Warcraft 3: Reforged last week, of course, and now intriguing co-op RTS A Year of Rain has been shelved, and the chances of it ever being returned to look slim.

On Tuesday, the development team informed the community that it had to scrap its future plans and shut down the servers, as it just didn't have the player numbers, and thus funds, to continue to support it.

"The low player base that you have witnessed yourselves hurts us substantially," reads the post. "We reached no more than 5000 players worldwide until today. We are deeply sorry for everyone who felt, or will feel, let down by us and the path we had to choose, considering we are an independent studio with limited resources."

The last part is a bit odd, as A Year of Rain is developed and published by Daedalic Entertainment—it's by no means huge, but indie is a stretch.

Players will still be able to muck around in multiplayer, and yesterday's final update swaps the matchmaking system for a P2P system. Leaderboards and players stats have been lost, too. The planned pathfinding update has also been scrapped.

A new mode has been introduced, however, along with new maps, though the team warns that it's rough around the edges.

"While the new content does not quite match the usual level of quality that we have set as the bar for ourselves, we believe we should not hold them back and really wanted to share what some team members spent their last two years working on.

When it was revealed last year, I had my doubts that a largely multiplayer RTS could keep its head above water. Daedalic also touted its esports chops, saying it would be "esports-ready" at launch, but that requires player numbers that A Year of Rain was sadly unable to match.

The last hotfix is out now, so take a look at the final patch notes.