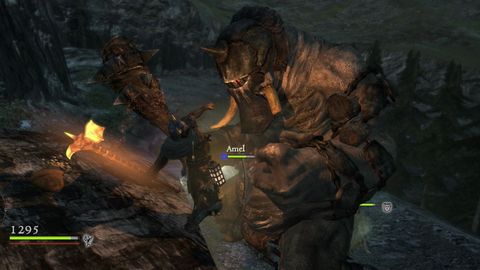 The PC port doesn't introduce much new and certain elements could be stronger, but Dragon's Dogma: Dark Arisen still shines as a uniquely enjoyable RPG.

What is it? An open-world RPG with excellent combat and a unique companion system.
Expect to pay: $29.99/ £23.99
Developer: Capcom
Publisher: Capcom
Reviewed on: Windows 10, 16GB RAM, GeForce GTX 780
Multiplayer: None
Link: Official site

Dozens of feet up, my gauntlets digging into the mane of a livid griffin, I knew I'd made a huge mistake. The beast was grounded when I'd hopped atop his back in the hopes of introducing his eyes to my sword, but he'd shot up so high afterwards that I could have seen the main character's hometown if I'd dared to look (and if it popped in in time). One slip, one splat, and it'd be game over. Below, though, a mage's spell set my group's weapons aflame. My ranger companion let loose a mighty arrow, alighting the monster's wings and bringing us slamming back to earth.

I already knew how all this would end: I spent many sleepless nights with Dragon's Dogma's appealing mix of Western RPG stylings and Monster Hunter-inspired combat years ago when it first dropped for the Xbox 360. Graphics have advanced, scores of better and lesser RPGs have come and gone, but there on the stones of the Bluemoon Tower, I still relished the return of the same rush of victory that overcame me in 2012.

Now, at last, we have the PC port, which takes its guise from 2013's Dark Arisen, a retooled version of the initial release with a ridiculously tough endgame zone and numerous tweaks to various annoyances. It's a port, all right, which is to say that it's here and it does little to distinguish itself from its console forebears aside from nifty features like better textures and uncapped framerates. (A single crash over 50 hours aside, it ran beautifully.) Still, that's cause for celebration. Scarred with imperfections but entertaining to the end, Dragon's Dogma is easily one of the most memorable RPGs of the last decade.

It achieves this distinction almost in spite of its story. It's not bad, and it's capped on one end by a dragon who eats your heart as though he's sucking Nutella off his claw and on the other by a deliciously bizarre conclusion preceding the New Game that still makes for good discussions when less than sober. In between, though, it relies excessively to backtracking and indulges too many humdrum sidequests. It clings to predictable Western RPG conventions: in one corner there's the dastardly secret society, in another, the artifact-stuffed ruin.

It works, though, because it's all told with enthusiastic gravitas. For all the chimeras and dragons, Gransys is a land that tries to stick to the real, favoring utilitarian armor designs over flamboyance, and the interactions impart a dutiful ‘let's do this’ sense I admire. This extends even to the open-world landscape, which boasts coastal cliffs, mountains, and towering Norman architecture but never quite inspires the kind of visual rapture you get from, say, The Witcher 3. (Worse, it's prone to pop-ins and muddy details at long distances.) Saving the world is a job, dang it, and Dragon's Dogma makes you feel it.

Jobs can be fun, of course, and Dragon's Dogma delivers a challenging brand of action that's rousing regardless of whether it's played on the keyboard or with a gamepad. Greatswords crash with hefty weight, arrows fly with satisfying thwapps, and spells impale ogres with icy tendrils. So many RPGs could learn from how fun this is. The appeal isn't just the fighting (which could benefit from a lock-on); it's also the way it lets you scramble up the arms of cyclopes and slice off the tails of lizard men. Sick of one of the main three classes of Fighter, Strider, and Mage? You can easily switch out to another and level its skills or those of six hybrids. Some fare better than others; Warriors, for instance, perform pitifully in Dragon's Dogma's many ranged encounters.

Enter the pawns. Nothing sets Dragon's Dogma apart quite like them. They're mysterious beings with classes and skills that fill the blanks of what you need, thus allowing my Warrior to bring along, say, a bow-toting Ranger, a healing Mage, and a powerful Sorcerer—for a price. You get a main pawn that other players can summon, and you can summon up to two of theirs as well. There's a satisfying Pokémon-like appeal to trying them out (which you'll need to since they don't level with you), and having to let go of a well-geared, well-skilled pawn sometimes stings like the death of a fleshed-out character in another RPG. Alas, they're prone to spouting obvious, ceaseless chatter such as "These stairs serve as a useful route in their own right," but happily Dark Arisen lets you switch that off.

If that's what it takes, do it. It's rough in parts, and numerous other RPGs tell a better story or inspire greater awe. But Dragon's Dogma still feels enjoyably unique four years on and that's something few of its genre cousins can claim. And the best thing I can say? Even now, I'm already itching to get back in.

The PC port doesn't introduce much new and certain elements could be stronger, but Dragon's Dogma: Dark Arisen still shines as a uniquely enjoyable RPG.