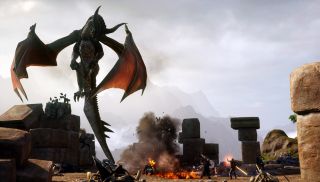 What was looking to be a year packed full of epic RPGs has become a little more spacious thanks to The Witcher 3's delay. Fret not, though, fans of magic, monsters and mead, for Dragon Age: Inquisition is still on course to land in the back half of 2014. Bioware have now confirmed the game's release date, announcing their October 7th target alongside a new trailer for the RPG sequel.

Dragon Age: Inquisition will put the player in a much more proactive role than previous games. As the founder of the Inquisition, and the only person able to close the fade rifts of the world, you're a more immediately instrumental actor in the series' plot. You can find more on the story, and Bioware's approach to the third Dragon Age game, in Chris's interview with executive producer, Mark Darrah.