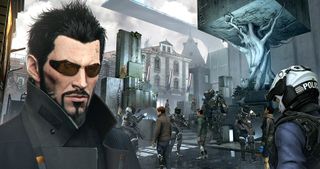 Eidos Montreal has announced via Twitter that the upcoming Deus Ex: Mankind Divided will have a New Game+ mode. What specifically that will entail wasn't revealed—it's hard to get into a lot of detail in just 140 characters—but in a new edition of DXTV, Executive Game Director Jean-Francois Dugas and Gameplay Director Patrick Fortier said that New Game+ will let players discover "even more about all the maps and the secrets" in the game.

The pair also touched on a number of other changes to the DX: Human Revolution sequel as well. The experience system will be better balanced by awarding experience points for combat actions, which they said will eliminate the feeling "that there is a 'right way' to play." Adam Jensen's Smart Vision has been upgraded to reveal loot as well as characters, and his weapons, including ammunition type, can be modified on the fly—even, apparently, in the middle of combat. The cover system has also been enhanced, enabling Jensen to quickly and accurately move between locations, and he'll also be back to hack from remote.

The best part about it (at least to me) is the news that Australian actor Vernon Wells will voice one of the game's characters. Wells is a stalwart sci-fi villain, probably best known for playing Wez in The Road Warrior and Bennett in Commando. He also seems to have something of a dire view of the future, saying that Mankind Divided "is like something that could actually happen in the maybe not-so-distant future."

Deus Ex: Mankind Divided is slated to come out in early 2016.