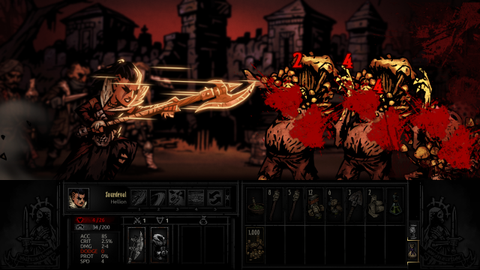 A wonderfully executed, brilliantly stressful reinvention of party-based dungeon-crawling, Darkest Dungeon is great fun, even when its cruel.

The first one to lose his mind is the plague doctor. His crow-faced mask wobbles as his sanity snaps, and he starts to pour abuse on his comrades. As the party fights unholy monsters in the crypts beneath a swamp, the chaos and his shouting break the rest. An armored paladin falls dead from a heart attack. Another chokes on a cloud of spores thrown by a monstrous, sentient fungus. The mad plague doctor runs alone out of the dark. He’s sent to the sanitarium. Like all veterans of bloody conflict, he’ll never be the person he was before.

In Darkest Dungeon, this disaster is known as “Week 3.” Every week goes about as well. Dungeon diving and tomb raiding have been staples of PC gaming for decades, but Darkest Dungeon is the first time I felt how awful this quest must be for the people involved. In Darkest Dungeon, explorers don’t just have to bandage their wounds and sharpen their axes—their biggest vulnerability is their minds.

After getting bored drinking and fornicating his way through the family fortune, your dear father decided to investigate rumors of wondrous magic buried deep beneath the ancestral home. But he and his workmen dug too greedily and awoke an ancient evil, sending the countryside into ruin. Just before he sends a musket ball through his brain, dear old dad sends you a letter: come home, rebuild the local village, and defeat the evil. Bang. Splat.

Once the road to town is reopened, you recruit heroes and send them into the dungeons four at a time. When (if) they return, they are damaged, stressed out, and hopefully a bit richer. While in town they can drink, gamble, pray—whatever they need to get their heads sorted out so they can walk back into the long dark. One half of Darkest Dungeon is managing this growing town, opening and upgrading blacksmith shops and taverns to give your heroes an edge in the fight.

The other half is the real meat and potatoes: leading sidescrolling parties of four heroes in turn-based combat against otherworldly horrors. Entering a dungeon brings up a map showing a simple floorplan: a few rooms connected by hallways. There’s no need to explore, and most levels ask you to explore the entire level anyway. The map’s real purpose is to show you how much of the level remains. If things are going poorly and you still have half a dozen rooms to clear, it’s probably time to wave the white flag and get out.

When your party of maniacs runs up against a squad of horrors, a short, turn-based battle starts. Combatants take turns using abilities to attack, heal, or cast spells. Especially at the beginning of the game, I found the few characters and abilities available made these battles more of a slog. Combat gets more fun as more character types arrive in town and new abilities get unlocked. Battles are always tense, though, and I found myself dreading them as expeditions grew longer and more dangerous.

It’s hard enough keeping everyone alive, but battles put adventurers under a lot of stress, too. Seeing a friend die or barely surviving a critical attack has a tendency to make people freak out. When characters crack, they take on random debilitating traits like “abusive” or “afraid.” This is the well-executed balancing act of Darkest Dungeon: I love trying to keep people healthy and sane. It’s easy to do one or the other, but that’s not enough. Your heroes can die just as easily from a heart attack as from a sword.

I also enjoyed tinkering with character classes in different party positions. The order of the heroes is important, with heavily armored tanks taking the front spot and spell-casters, archers, and healers holding in the back. Most melee attacks can only be aimed at the front ranks, and some spells can only be cast from the middle of a group. The most interesting classes are those in the middle. I enjoyed experimenting with characters who could fight in a melee role from one spot, but a support role from another.

During one of my early expeditions, I had poured through character sheets to find the perfect set of four heroes and assigned them in the perfect order. In the team’s first battle, an enemy summoner opened a portal to hell. A massive tentacle reached through it and grabbed my healer, shoving her to the front of the party and flipping my careful plan right on its ass. Darkest Dungeon’s greatest delight is finding new ways to screw you.

Darkest Dungeon is exceptional for how carefully-built and deliberate all its parts are. Every sound effect, every splash of color, and every character and ability all work to create an environment inspired by low fantasy novels and pulpy weird-horror magazines. When the Vestal, an acolyte of a Roman goddess of purifying fire, became racked with fear, she would cry out for her god’s protection in the darkness. When the hound master lost his mind to stress, he became bitter and withdrawn, commenting that his bumbling companions lacked proper training. I love that Darkest Dungeon takes inspiration from so many sources, yet uses all of those pieces to create character classes that serve a clever, foreboding fiction.

There’s an important distinction, though, between the character classes and the individuals. The classes are interesting and unique, but the individuals are just meat for the grinder. The worst thing about Darkest Dungeon is coming to grips with the idea that there can be no perfection. As a habitual save-scummer, this was hard for me. The auto-save feature is always on, so every mistake, every critical hit or critical miss, is permanent. Every death is permadeath.

This can be especially frustrating in early missions, when the slow trickle of heroes and their low-level abilities don’t always give you the tools you need to handle the pain coming your way. After an easy first mission, I consistently lost people, abandoned missions, or wrote off entire expeditions in the early weeks. During one very frustrating expedition, my healer kept everyone in tip-top health, but I had no way to manage stress. The mission ended in disgrace when four completely able-bodied adventurers died in an unprecedented quadruple heart attack. I’ve played a lot of permadeath strategy games, but I’ve never experienced a squad wipe due to acute mental distress before.

One of the reasons I love Darkest Dungeon is that measuring the mental toll of adventuring feels so overdue. Game violence has been consequence-free for a long time, but that’s changing. The new Tomb Raider games show Lara Croft dealing with profound mental trauma, for example, and games like Viscera Cleanup Detail poke at shooters’ carefree bodycount.

Maybe it’s even part of a growing cultural awareness of the cost of violence. With thousands of new veterans returning from Iraq and Afghanistan, PTSD has become a household word. I think it’s fine to avoid the complex topic in a videogame, but walking into the subject directly is gripping where an artful evasion is the norm. This isn’t to say that Darkest Dungeon makes any kind of statement about veteran care or the cost of real war, but I do think these themes are engaging. Battling demons in a dungeon would really mess people up, and that’s not often acknowledged through game design in such a pronounced way.

The more I played, the more I grew detached from the heroes in my roster. I even refused to rename or invest in the veterans of multiple tours—exactly the opposite of my squads in XCOM, which were all customized and named for family and friends. Becoming attached would make it more stressful to send them on another ill-conceived quest for trinkets and coin, and even more disappointing when they came back broken and despondent. When the cost is measured in sanity and blood, the most powerful lesson Darkest Dungeon taught me about adventuring is that it isn’t always worth doing.

Blades, guns, spells, prayers: your adventurers fight with anything that works.

That’s a good boy. Who’s biting the eldritch horrors? You are.

The most dangerous enemies attack your sanity directly.

When things go bad, your characters develop new traits that change their behavior and sour the entire party.

The Leper is a reliable tank with resistance to blight.

Every attack can (and will) be countered at the worst moment.

A wonderfully executed, brilliantly stressful reinvention of party-based dungeon-crawling, Darkest Dungeon is great fun, even when its cruel.