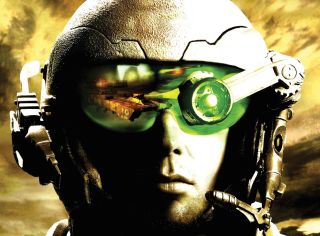 Reinstall invites you to join us in revisiting PC gaming days gone by. Today, John revisits the mostly-brown fields of Tiberian Sun.

This feature was originally published in PC Gamer UK 312 and PC Gamer US 300. Subscribe here and get great features like this delivered to your door or digital device every month.

Was I the only one who used to misplace my stealth tanks? It was a problem I had in 1995's Command & Conquer, so imagine my woes in 1999 when C&C's sequel, Tiberian Sun, introduced cloaking devices that made entire bases disappear. Thanks, Westwood.

Tiberian Sun is the sequel to C&C, set after the first Tiberium War. It was the first game released after Red Alert, which was conceived as an expansion for the original C&C. Red Alert became so impressive, however, that Westwood marketed it as a standalone game. Tiberian Sun, meanwhile, was teased on Red Alert's installation disc as a first-person Mechwarrior-style game that would eventually became C&C Renegade. The real Tiberian Sun was spared such ignominy, and became one of my favourite games in the series.

In the context of the C&C universe, Tiberian Sun isn't the first game you'd install if you were to replay the series. It is, however, one of the most important. While it lacked the contemporary military feel and tank rushes central to the Red Alert games, it was a leap forward for the genre for many other reasons. Crucially, its futuristic setting allowed for more unusual units, in turn offering a new perspective for how different factions in a real-time strategy could be balanced (or not) against one another.

I reinstalled it because most of us played Tiberian Sun at a resolution of around 800x600, which made the unit models look blocky and almost cell shaded—worse in some ways than Red Alert. I remember being disappointed at how the units looked when I installed the demo off the PC Gamer cover disc.

Today, with a quick edit of one of the game's text files, you can play the game at whatever resolution you want. At a native resolution, more than double what you'll have used in 1999, the game looks crisp, and the extra visibility means less blundering around with the minimap, and more time staring at incoming attacks.

Tiberian Sun immediately feels much more cinematic in comparison to its predecessors, and though the FMV sequences and animations have aged like a bad curry, Tiberian Sun's handsome budget brings us Michael Biehn and James Earl Jones. Biehn is as convincing as a cat wearing a false beard in a basket full of miniature schnauzers, though, and the presence of James Earl Jones doesn’t make this Star Wars—nor does painting an AT-AT yellow and stencilling 'Mammoth Mk II' on the side.

Crucially, Tiberian Sun took the leap from a straight top-down view to a more three-dimensional looking isometric engine—thoroughly frustrating for the furiously retentive among us who love vertical and horizontal walls, but nonetheless a brilliant investment for the genre. Features such as dynamic lighting, scripted night-and-day cycles and even meteor showers combined with electrical storms all create an eerie and compelling atmosphere. Basic destructible scenery as well as repairable bridges, working trains and large urbanised cities all make their C&C debut in Tiberian Sun.

Tiberian Sun's importance is proven in the fact that most of the new mechanics it introduced were adopted by all of the C&C games that followed. Being able to queue the construction of units is the best example. The idea of a hotkey to select all unit types on screen is another, as was the introduction of veteran statuses for units who'd seen more combat than others.

Sadly, elements such as Red Alert’s thrilling sea battles are missing. Fast-paced attacks with standard tanks are gone, too, replaced instead by unusual sets of futuristic units and infantry. Some even need to be deployed to be used, which is an important factor in lending the game a slower and more considered pace. Having more time is key, as Tiberian Sun's strange combinations of units for both NOD and GDI mean you need to think about which to use to be effective. In Red Alert you wouldn't go far wrong whipping up a dozen Mammoths and sending them rumbling into the enemy base—mostly because each Mammoth has anti-tank, anti-infantry and anti-air capabilities, plus regenerative armour. Tiberian Sun isn't as forgiving.

Attacking as NOD, for example, requires at least half a dozen artillery, but they need to be deployed to be used, meaning you have to shuffle them across the map in stages. Equally, the more standard tick tanks can be deployed, too, but you need to make sure the mobile repair units stay nearby and that flame tanks are close to mop up any infantry that the artillery miss. That's not all, though. NOD have no effective anti-aircraft unit, so you need to fill subterranean APCs with rocket infantry. Good luck finding them in the midst of battle, especially when you've already lost your cloaked base. Chances are they'll get roasted alive by your own flame tanks when things kick off and the whole attack will go belly up. The game requires time. It's designed to be played in the late hours, when everyone's gone to bed. Throw in a pint of tea and a sausage dog asleep on your knee and you're set.

Tiberian Sun's campaign missions are enjoyable, and very few of them begin with the dreaded words 'timer started', meaning you can sit back and employ some tactics. The FMV sequences are both dreadful and lovable, and Tiberian Sun's improved engine allows more of the story to unfold in the game itself. Commando missions still play a big part, and the battle for Hammerfest base, as well as defending the huge UFO crash site, are ones that stand out. Tiberian Sun's missions are all about offering new challenges beyond the usual 'just blow up the ones in red'. Chasing after a runaway train, shooting Michael Biehn's brother with a tranquilliser dart, and even instigating a prison break with mutants (and a pig) are all in there.

Though the game is set in a bleak post-apocalyptic Earth, Tiberian Sun does dip its toe into silliness. In one NOD mission you're poised to attack a civilian mutant base whilst masquerading as GDI, but you soon find they're counter-attacking in a fleet of schoolbuses and winnebagos equipped with missile launchers. As if such absurdity isn't enough, once you've dealt with the militia, you get ambushed in a Tiberium field by mutant boars with luminous green hair that fire high velocity snout-propelled bogies.

In addition, some maps are covered with orange Tiberium 'weed' which, as well as being a harvestable resource for NOD's toxic missiles, is lethal to vehicles and grows from some kind of central sand anus. Naturally when your units attack the anus it blasts out green gas that then poisons any unfortunate bystanders, instantly turning them into aggressive pulsating blobs. It's an absurd ecosystem that only becomes more bizarre with the additional Tiberium monsters in the expansion, Firestorm.

For me, Tiberian Sun’s main problems are little more than niggles. Many of the unit cameos in the construction menu, for example, are just screenshots of each item from the game, which feels lazy. And small details, like the way subterranean units still throw up brown soil when they burrow in the arctic missions, instead of snow, seem overlooked.

It's still got a lot of game to offer, some cutscenes that are worse than you remember and naturally a whole host of community-made mods (Twisted Insurrection in particular is a favourite). Just remember to assign hot keys to your stealth tanks, for goodness' sake.

You can subscribe to our magazine, published in both US and UK, here. As a bonus, here's a Kane-related boxout that appeared in the original print version:

John's been gaming since Doom. He's 98% human, 2% cyborg, but don't let his metal wrist fool you, he still knows how to pile the bodies up on Battlefield and designs bookazines in his sleep.
See comments