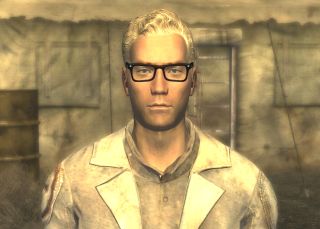 In a very wholesome Twitter thread where tabletop RPG players shared stories of the most impressive props they'd seen during a game, Josh Sawyer of Obsidian chimed in with the time he played in a Fallout game run by Chris Avellone during the Black Isle days. Avellone gave each player a binder full of information that was kept updated during the campaign, full of info about the people and places involved.

back at black isle, chris avellone ran a fallout ttrpg. each player had a massive binder that chris kept up-to-date with campaign info. definitely the most comprehensive player handout i’ve ever seen. pic.twitter.com/TLslbpcGelApril 19, 2019

As you can see in the first picture, Sawyer's character was "Arcade Gannon", a name that would be re-used for an NPC in Fallout: New Vegas years later.

Update: Avellone nicely shared some more of his "Paper prototyping" for Fallout. Van Buren was the cancelled Fallout 2 follow-up Black Isle were working on, some of which found its way into New Vegas.