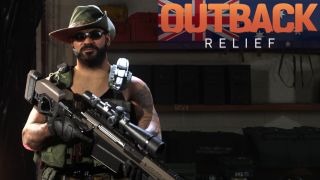 Call of Duty: Modern Warfare's Outback Relief Pack has raised more than $1.6 million USD ($2.38 million AUD) in aid for those affected by the Australian fires.

The pack includes a variety of Australian-themed cosmetics, including an adorable Koala gun charm, emblems, a calling card, weapon skins and, of course, a hat. While the pack existed before Activision's charity drive as the Outback Pack, it was announced last month that the net proceeds of each sale of the newly-renamed Outback Relief Pack up to January 31, 2020 (including ones sold before the announcement was made) would be donated.

Activision has explained where this money will be going in a new blog post. It is working with Direct Relief, an international humanitarian aid organisation, to ensure "100% of the funding" goes to Australian relief. Talking about the drive, Call of Duty general manager and VP Byron Beede thanked players who bought the pack,

"Call of Duty players around the world came together in support of this terrible tragedy. We’re honored to help in this effort with the funds from the Outback Relief pack. We thank everyone for their generosity, and we look forward to putting this donation into action".

The fires, which began in June 2019 but hit crisis levels over the New Year, have destroyed approximately 18.6 million hectares (72,000 square miles) of land, killing an estimated 34 people and one billion animals, including potentially leading to the extinction of some species.

It's worth noting that only the net proceeds of the Outback Relief Pack were donated, meaning this came at zero cost to Activision or Infinity Ward. $2.38 million AUD for the cause is fantastic, but it does raise the question as to why Activision, one of the largest game publishers out there, couldn't just donate all revenue from a single pack of cosmetics.

While the Outback Relief Pack fundraiser has now ended, you can still donate to Australian relief, as the effects of the fires are still being felt. The WWF runs its own Australia appeal, and Victoria's Country Fire Authority has information on how to donate to it, or one of its fundraisers, directly.