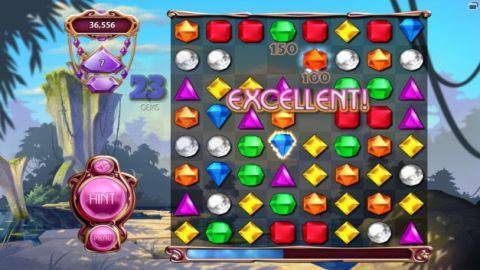 A fine balance of polished gaming and addictive new modes. The worlds most compulsive puzzle game just got even better.

I've been in a trance-like state for the last two hours, subconsciously creating rows of identically coloured gems and breathing in time to visual cues, while the sound of falling rain coerces me into a deep, meditative state. Bejeweled 3's new Zen mode is remarkable.

An addition intended to relax stressed minds, Zen mode takes Bejeweled's regular mechanic – clearing an 8x8 grid by aligning identically coloured jewels in rows of three or more – and adds a few tweaks. Firstly, everything is easier, with more opportunities to create multiplier gems and less chance of the dreaded 'NO MORE MOVES' situation. There are options to help you modulate your breathing while the game plays relaxing ambient noise. But the most notable – and brave – feature in Zen mode is 'binaural beats'. Developed with scientists, the idea is that by feeding your ears a continuous loop of single band frequencies, you'll enter a relaxed mental state. So I plugged in my headphones and started the 'Chill Cycle' loop – recommended to wash away 'troubling thoughts and stressful energies'.

I'm now utterly docile, drifting around in a dreamy haze, unable to believe that a basic puzzler has done the work of a skilled masseuse and a bottle of Sauvignon Blanc. PopCap have once again proved that they have magic fingers.

But before the more serious gamers turn away, you'll be pleased to know that there's more to B3 than hardcore relaxation. For a start there's the basic match-3 game under the guise of Classic mode, while the arthritisinducing Lightning mode is essentially Bejeweled Blitz: blast as many gems as you can within a oneminute time limit, which can be extended by hitting clock gems.

Zen mode is a calm ocean compared to the stormy seas of the other new addition, Quest mode. It comprises 40 minigames (although half are just harder versions of the first half) and you'll need ninja-quick reflexes to overcome the timelimited puzzles. Ice Storm, for instance, requires you to hastily line up gems so that the explosions stop the grid from freezing over. Wall Blast, meanwhile, has you targeting your explosions at a wall before tempus fugits.

While many of the puzzles depend on beating the clock, which does becomes repetitive, two are more cerebral: Butterflies and Poker. The former has you matching sparkly gems with steadily advancing butterflies in order to save them from the spider at the top of the screen. The latter scores you based on the ranking of each poker hand you put down. Clear three sets of blue gems, and two sets of red, for example, and you've got a Full House worth 750 points. The nature of these two puzzles pushes you to think several moves ahead before you even touch a gem. And the payoff is damn satisfying.

Between Zen's hypnotic powers, Quest's fiendishly cognitive puzzles and further tweaks (such as badgeawarding and a simple XP system), Bejeweled 3 is the perfect example of how PopCap will be the ruin of us all. The time-based challenges do start to grind after a while, but the balance of rewards, satisfying combos and brow-furrowing action will keep you playing. “I'll just do one more game before I eat my tea,” you'll say. Before you know it, it's 2am and the oven has been on the whole time. Touché, PopCap. You owe me a pizza.

A fine balance of polished gaming and addictive new modes. The worlds most compulsive puzzle game just got even better.