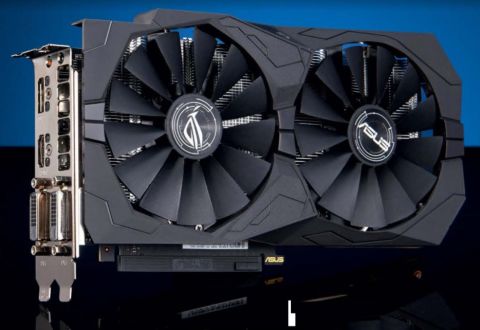 Other better options exist and you don't need to look hard to find them.

Nvidia's GeForce GTX 1050 Ti is a rather curious concept. It follows a long line of prestigious graphics processors with its nomenclature—from the PCI powerless GTX 750 Ti, to the value-demolishing 950—yet this variant just doesn’t seem to have hit the same mark. The Asus card still requires that six-pin PCI power connector, and it doesn’t quite reach the heady heights of glorious frame-rate-to-dollar ratios that we want when it comes to price, either.

So, where shall we begin? Let’s start with the spec. Nvidia’s GeForce GTX 1050 Ti comes with 768 CUDA cores, 48 texture units, and 32 ROPs. In contrast, the previous generation had 768 CUDA cores, 48 texture units, and 32 ROPs. “Well, of course, it’s a process shrink,” we hear you say, “So nothing else is bound to change.” We’d be inclined to agree, if it wasn’t for how the rest of Nvidia’s lineup has evolved this past year.

Compare the 1060 to the 960, and the number of cores has expanded from 1,024 to 1,280, with transistor count increasing by 1.46 billion in the process. The 1050 Ti, on the other hand, has a meager transistor increase of just 0.36 billion. You see where we’re coming from here? The problem is, that it shows, terribly so. And when you consider the price of the GTX 1050 Ti—even with the 4GB variant versus the 3GB GTX 1060—well, you’ve got to be asking yourself some serious questions about why you would want to sacrifice that extra processing power.

On to performance figures, then. At 1080p, this card achieved 43fps on average in Far Cry Primal, contrasting starkly with the GTX 1060 3GB’s 61fps. In Attila, the difference was less pronounced, with the plucky underdog losing out by 13fps, but in almost all the other titles, the difference is quite large. In fact, it was so bad, it forced us to reach back into our archives to see how well the GTX 960 scored in synthetic benchmarks compared to the 1050 Ti. The answer? The 960 scored just 200 points less in Fire Strike than this new 16nm card. Ouch.

Power draw, on the other hand, is more in line with what you’d expect from a card of this caliber. Overall draw from the wall stays resolute at 216W under maximum load, and 52W at idle.

It's not all bad

Pushing the GPU aside for a moment, let’s look at this card in isolation. Aesthetically, Asus really has nailed it with this iteration. It isn’t the triple-fan, galvanized concoction of metal and RGB LEDs that we find on cards higher up in the series, but a dual-fan solution, with a far smaller overall footprint, produced in a much more stylish manner.

Don’t get us wrong, the DCIII is great at reducing overhead temperatures, but the added length puts many folk off, and it's simply not required on moderate cards like the 1050 Ti. The dual-fan solution looks crisp, clean, and sharp, and the added backplate adds to the premium feel. The fans are quiet—almost silent—while spinning at low loads, with 0dB fan technology included to reduce noise while idling on desktop. It’s almost as though the AIBs have been let down by the GPU.

Ultimately, if you were to evaluate this card outside of the GPU ecosystem, you’d be pleased with its performance. At 1080p, it can easily hit 30–45fps in most modern titles. However, comparing it to the GTX 1060, which is only $20-50 more in some scenarios, or even the RX 470, at just $5 more, it’s hard to justify this card’s position in the market.

We generally recommend the RX 570 Strix 4GB or the low-end GTX 1060 instead, but with the recent cryptocurrency mining craze, those cards can be very difficult to find in stock. Right now, the price on this particular Strix model is unfortunately too high as well, but we’ve been told the price of this specific card will be dropping over the coming months.

Overall, 1050 Ti remains a viable budget option, but If you're looking to save money by getting a 1050 Ti instead of a faster GPU, we recommend looking at one of the less expensive 1050 Ti cards, including Asus's own 1050 Ti that's currently on sale for $130. It has a single fan, doesn't need a 6-pin power connection, and is only clocked a bit lower (1290MHz vs. 1392MHz). It might not be as quiet or sexy, but for budget gamers, those items shouldn't be at the top of your list.

Other better options exist and you don't need to look hard to find them.