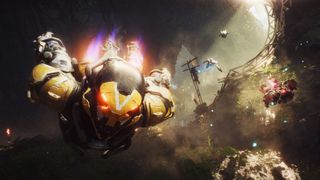 Some Anthem players are fed up with its punishing and tight-fisted endgame loot grind and the slow progress BioWare is making toward fixing it. To voice their concerns, people on the Anthem subreddit are organizing a boycott to get their point across. This comes after a bug dramatically increased the rate at which players earned coveted Masterwork and Legendary-tier items for a short period last weekend. A few hours later, BioWare fixed the bug with the release of their 1.0.3 patch—but players have made it loud and clear: Anthem was more fun when it was raining loot.

"Protest the loot drop changes. Bring back the bug and let us taste the lootshower," reads one of the most popular posts on the Anthem subreddit currently. Written by redditor 'Afinda,' this thread encourages players to organize and stop playing Anthem starting March 11 until March 15 to send a message that players aren't happy about BioWare's lootless loot shooter. "Get your point across, simple as that," writes Afinda. "Stop Playing the game for a whole week (hopefully with the support of the entire subreddit) to show BioWare that all it'd take for us to really enjoy the game is to receive loot."

Take a look at the subreddit, though, and you'll see Afinda isn't alone in expressing their frustrations with Anthem's loot system.

Though I never much liked Anthem to begin with, a lot of players were enjoying it until they started digging into the endgame grind over the past few weeks. Anthem doesn't have much an endgame to speak of—just three Strongholds (similar to Destiny 2's Strikes), one of which is just the recycled final mission. In light of these repetitive activities, one of the few joys of Anthem's endgame was getting Masterwork and Legendary loot that could significantly boost the power of your javelin exosuit. The idea was that, by farming up better gear, players could push into the much more challenging Grandmaster 2 and Grandmaster 3 difficulties, where enemies HP and damage scales exponentially along with your chances of earning that gear.

But even with the increased drop rates, Anthem's loot system is punishing thanks to randomized stats that can make even a sought-after Legendary weapon a downgrade over lesser tiers of loot. Coupled with how rare it is to even get Masterwork and Legendary gear in the first place, it makes grinding for loot in Anthem pretty disheartening.

That's why the bug that made Masterworks and Legendaries more plentiful was so positively received. During that brief window, players were reportedly earning upwards of six or seven Masterwork items each time they completed a stronghold, where before they would frequently earn nothing. "'Bugged' loot was the best Anthem felt since launch," wrote one redditor.

"BioWare, whatever you have done to the loot, intentional or not, DO NOT REVERT IT," wrote another.

Those posts were both made on Saturday, hours before BioWare fixed the bug, resulting in widespread criticism and anger from the community. Since then, the Anthem subreddit has become overrun with threads of those frustrated at how BioWare isn't appearing to listen to its community. Compounded with the already growing list of problems that players have with Anthem, it's understandable that its community is losing its patience—especially when it feels like BioWare is actively making the game less enjoyable with their fixes to how its loot works.

This isn't the first time a bug has caused a big controversy, either. It seems like every other week there's a new revelation upsetting players, like when it was discovered that Anthem's level-1 rifle was actually the most powerful weapon in the entire game or when PS4 players' consoles were crashing so hard there was concern that Anthem was bricking PS4s. Since launch, it's been one major disaster after another, prompting many players to draw comparisons to Fallout 76 and No Man's Sky.

We've reached out to BioWare directly but it did not respond in time to publish this story. They haven't they addressed the community at large, either. We'll update this article if either of those changes.