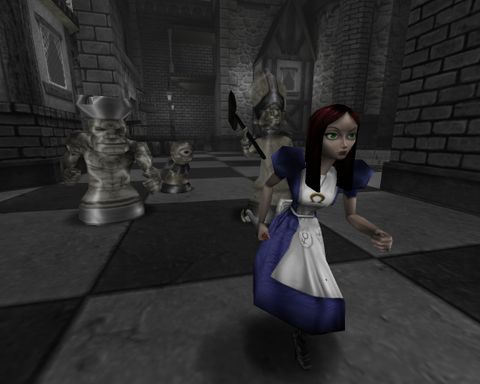 A visual masterpiece with enough good gameplay to make it a classic.

Tyler provides context and commentary followed by the full, original text of our American McGee's Alice review, originally published in the February 2001 issue of the US edition.

Because I feel like it, I chose one of my favorite games for this week's jaunt into PC gaming history. Alice is McGee's best game, I think, unless you count his work on Doom II and Quake. The 2011 sequel, Alice: Madness Returns, was nice, but not nearly as striking to me as the first corrupted Wonderland. That may have a little to do with how visually impressive it was at the time, which reviewer Chuck Osborn explains.

invite you to follow them down the rabbit hole.

Somewhere, Charles Dodgson (a.k.a. Lewis Carroll), the whimsical author of “Alice's Adventures in Wonderland,” must be spinning in his grave. If he were alive today, seeing his beloved Alice—known for her innocence and gentility—transformed from naïf to sullen, angst-ridden killing machine in a third-person action/adventure would surely send him straight back to the hereafter. This isn't Lewis Carroll's Alice—it's American McGee's Alice…and the tea party is over.

Several years have passed since Alice's first trip to Wonderland, and as the entrancing opening cinematic tells us, since then her real life hasn't been quite so wonderful. Though the details are left intentionally fuzzy, a fire has consumed her family, leaving her alone, catatonic, and institutionalized. Lying strapped to the bed of her padded cell, she's once again drawn to Wonderland by the Rabbit (in the guise of a stuffed animal), who warns her of a great crisis.

Above: The original trailer.

Alice isn't the only one who's changed since her last visit; Wonderland itself is a nightmarish vision of what it used to be. The Red Queen of Hearts rules with an iron first, and has turned most of the inhabitants against you. The Cheshire Cat, who acts as your cynical tour guide and advisor, is mangy and ear-pierced. The Mad Hatter isn't so much “quite mad” as quite homicidal, happier to fling fiery bombs than crumpets. Now a true lunatic, he's made the Dormouse and March Hare more “efficient” by subjecting them to bizarre Borg-like surgical experiments. Even the once-thoughtful Centipede and the oafish Tweedledee and Tweedledum can't wait to send you six feet under. Alice needs all her wits to defeat the Red Queen and free Wonderland's inhabitants from tyranny.

If Alice's maturation has been torturous, then this new Wonderland's hideously fractured fairytale visage perfectly reflects her shattered psyche. Visually, this is the most amazing game I've ever played—each level is such a centerpiece of fiendish hysteria that it makes you wonder what the level designers were smoking and where you can find some.

The Quake III engine has never seen this kind of workout before. Meshing the creepy, playful, ominous, and childlike, each new area looks absolutely nothing like those that came before it. You'll happen upon a quaint schoolhouse teetering in space in The Vale of Tears; clamber through the mechanical clockworks of The Queen's Domain; ride a leaf down the raging rapids of the Mushroom Forest; and even transform into a living chess piece in Chess Village. And that's just a sampling.

What's disappointing is that despite the brilliant locations, the underlying third-person gameplay is rather ordinary. Super Mario 64 and Tomb Raider paved this road years ago, and Alice offers a similar assortment of impossibly huge level bosses, jumping puzzles, lava rivers, slippery slopes, and brain-damaged enemies. Most bosses can be defeated with a combination of circle-strafing and rapid weapons fire, and nearly every enemy's AI is so simple that they run straight toward you kamikaze-style when activated. Maybe the Queen's oppression will do that to a guy.

Controlling Alice with mouse and keyboard is easy enough, and the blue cursor used for aiming is unobtrusive. Weapons are like those you've seen a thousand times before, but gussied up enough so that they almost seem fresh. The basic knife (here called a Vorpal Blade in a nod to Dungeons & Dragons) is your starting weapon, and can slice enemies in close quarters or be thrown from afar. The Icewand is handy for freezing enemies or creating a temporary ice blockade, and can be one of the most potent toys in your arsenal—especially against fire-based creatures.

Your deck of cards can be thrown at enemies, homing in on them from a distance; jacks create a (rather weak) cutting attack; you have an exploding jack-in-the-box; and a pair of Demon Dice open up a dimensional rift to a creature that can either attack your enemies or, if you're alone, you. My favorite weapon, however, isn't really a weapon at all, but the Deadtime Watch that literally stops time in its tracks. It's as if you've taken a screenshot—with everything, including weapons effects, completely frozen—and then can walk among the characters, beating them senseless.

The moody musical score is both eerie and enchanting, conveying a Fantasia gone terribly wrong. The sound effects are likewise spooky, and sometimes downright disturbing, such as when Alice enters an insane asylum occupied by crazed children. The manic giggles and sharp “slap” noise they produce smacking themselves in the face with their own fists may just haunt you come bedtime. Alice's voice is perfectly suited to a petulant English girl capable of mass destruction, and you can almost hear the smirk on the Cheshire Cat's roguish lips.

While Alice isn't exactly revolutionary, it's definitely a fun-filled ride. It simultaneously disorients and intrigues; I desperately wanted to know what was ahead even when I'd lost all sense of time and direction. The story's subtext of emotional self-discovery offers few surprises, but once you get into the game you won't really care. Alice is a grand experience from beginning to end, and a fit of inspired madness that I'd wish on anyone. — Chuck Osborn

A visual masterpiece with enough good gameplay to make it a classic.