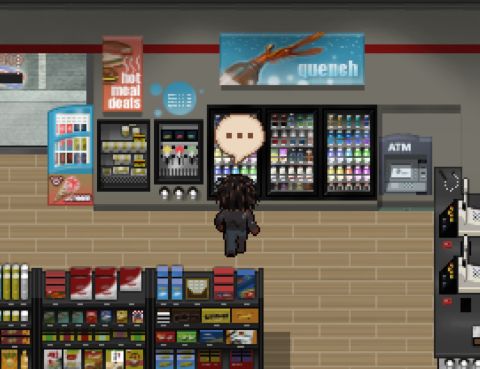 A convincing examination of player choice set in an all-too-realistic modern world.

Your career is slipping through your fingers, you can't afford to pay your rent, and the person you once thought would love you forever has walked out of your life. When things go so wrong so fast, it's human nature to obsess over what you could have done differently. Story-heavy RPG Always Sometimes Monsters asks what we can do instead, and specifically what choices we will make when we try to set things right.

Your character's goal arrives in the post on the second day of the main story: an invitation to the wedding of their now ex-partner, in one month's time. To make it there, you'll walk from place to place, visiting and talking to dozens of different characters via some basic top-down RPG interaction and managing a simple inventory of things like the food you'll need to keep up your stamina.

You'll have to balance the need for enough money or favours to get across the country with the time it takes to earn them, and face the consequences of that balancing act along the way. The day before the invitation arrives acts as a neat demonstration of that process: your landlord threatens to make you homeless unless you can bring him $500 in overdue rent by the end of the day, which you'll discover is only manageable if you do things like steal from your trusting elderly neighbour or pick people's pockets during a shift as a cloakroom attendant.

Later on, you'll be able to opt for low-pay but legal manual labour, which Vagabond Dogs has made deliberately slow and tedious for the player to ensure it's about as tempting as it is in real life. But most choices in the game are less obvious. Consequences are unpredictable in this world and aim to reflect real life situations to some degree, where chatting to colleagues at your temp job about the guy you've replaced might be enough to stop him from shooting himself.

Sometimes these options lack the choice that tally with your instincts or sense of logic, however. Always Sometimes Monsters cannot help but fall prey to this – you can't just phone a friend for help on that first day – but also uses it to its advantage in flashbacks that prevent progress until you make the choice your character has technically already made. You can't change the past, is the obvious point being made here, but it is dramatically effective. The flashbacks also play a crucial role in making the protagonist relatable.

The chance that you'll relate to your character is also increased by the additional choice of their gender, race, and sexuality. In a clever prologue scene set at a party, you choose from a range of potential protagonists via a publisher choosing which writer to sign, and while their backstories are the same the reactions of other characters will differ. Play as a black lesbian, and you might experience a doctor accusing you of playing the race card, a 'friend' ascribing your apparent lack of fashion sense to your sexuality, and plenty of everyday sexism. “I still expect a hard day's work from you,” says the warehouse foreman, “Even if you are a woman!”

The low-res RPG Maker aesthetic might seem at odds with the often stark subject matter, but the limitations of the tool help rather than hinder the game. Limited by little more than the amount of words the writer could produce and the player's imagination, Always Sometimes Monsters is able to tackle everything from homophobia to drug abuse to suicide with credibility. The focus is on the writing, sometimes overly dramatic but always engaging, and on the many branching paths down which your decisions can take you.

It's refreshing to see this kind of real-life subject matter explored in a choice-based game, and presented in a way that's competitive with the best written of those types of stories. Always Sometimes Monsters' vision of the real world can be painful to experience at times, but only in a way that demonstrates the level of craft in developing this strong tale about modern life.

A convincing examination of player choice set in an all-too-realistic modern world.