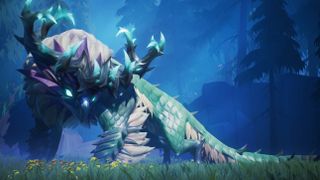 Update: Dauntless dev Phoenix Labs emailed PC Gamer to clarify that the migration process will be opt-in only, not an automatic migration of accounts.

Although Epic's store will become the only way to launch Dauntless, "no one will have their account linked without their participation," a rep told PC Gamer. "During the process, we are not sharing any personal info with Epic," the comment added.

Dauntless, the multiplayer behemoth basher, will be ditching its launcher soon and converting all player accounts into Epic accounts. Announced at the Game Awards, the free to play game will launch on the Epic Games Store and adopt a Fortnite-style structure, but that does mean beta players will need to download the store client before Dauntless’ launcher vanishes. Developer Phoenix Labs has posted an FAQ that covers the migration.

You don’t need to do anything at the moment, so you can keep using the old launcher. Eventually, however, that’s going to be flung in the bin. There’s no date yet, but in the weeks approaching the switch, Phoenix Labs will start to convert accounts, at which point you’ll have to use the Epic Games Store.

Phoenix Labs recommends making an Epic account now, however, as there’s no guarantee you’ll be able to keep your username. If an Epic user already has it, you’ll need to come up with a new one. The announcement doesn't appear to be going down well over on the Dauntless forums.

The move apparently comes down to the crossplay benefits. Phoenix Labs wants Dauntless players, much like Fortnite players, to have access to their account across a wide range of platforms.

“When we started building Dauntless over four years ago, we had a vision: No matter where you were in the world or which platform you were playing on, you would be able to play with your friends,” says Phoenix Labs. “Epic Games blazed a trail by delivering the first game with true cross-play on PC, Xbox One, PlayStation 4, mobile, and Nintendo Switch. We are grateful to partner with them on Dauntless.”

The migration process will start “as soon as possible”.