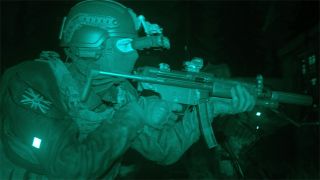 Activision is teasing a new weapon customization option in Call of Duty: Modern Warfare called Gunsmithing that will give players the ability to kit out their primary and secondary weapons for "the precise type and style of firepower you require for any type of multiplayer game mode." But what's potentially most interesting about Gunsmithing is that you'll be forced to prioritize what you really want to tweak, because you won't be able to do it all.

"You can customize up to five parts of each weapon, until your available slots are filled," editorial manager David Hodgson explained. "With Assault rifles, for example, you usually have nine areas of the weapon to augment: The Muzzle, Lasers, Optic, Stock, Rear Grip, Magazine, Underbarrel, Barrel, or a Perk. Choose wisely."

Hodgson also revealed that a "comprehensive, epic, and suitably bombastic" reveal of Call of Duty: Modern Warfare will take place on August 1 on Twitch. Modern Warfare's new 2v2 Gunfight mode was revealed a couple of weeks ago—here it is in 4K.