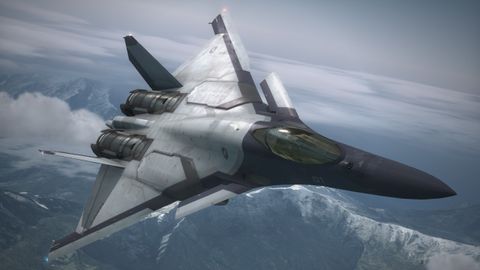 Uncomplicated but gratifying flying, in scenarios of increasing silliness and therefore likeability.

What is it? Accessible dogfighting and baffling cutscenes, in that order.
Expect to pay £50/$60
Developer Bandai Namco
Publisher In-house
Reviewed on Core i5 6500, GTX 1070, 16GB RAM
Multiplayer Up to 8 players
Link Official site

Aerial combat games can be split down the middle, more or less, according to which half of the '90s they hark back to. Is it an ode to Afterburner, all effortless loops and rolls? Or is it the kind of rigorous flight sim which flew so high in the decade’s latter half, turning a correctly retracted landing gear into a real achievement and almost invariably taking its name from a plane (see Falcon 4.0, B-17 Flying Fortress et al)?

You don’t need me to tell you that Ace Combat 7 is the former. You can see by the screenshots, by the very name, that this is about getting you up in the air and feeling like Maverick ASAP, laws of physics be damned. The latest in a 23-year-old series devoted to just that, no less. And on those particular terms, it’s a roaring success.

As with its predecessors, there are two different flight models available here, one professing to offer a simplified handling experience while the other offers a deeper simulation. In truth, neither one is particularly taxing and the most discernible difference between them seems to be the necessity to use yaw controls in simulation mode. It’s Need For Speed handling in the air then, essentially, and there’s nothing inherently wrong with that. After an hour or so of chucking a fighter jet about with cartoonish abandon though, you do feel a desire to test your flight skills further than either model truly allows.

No, instead that challenge must be gleaned from Ace Combat 7’s missions, which start off punishingly pedestrian but kick into gear three or four levels in and reveal an absolutely unhinged campaign. What begins as 15 minutes of shooting at radar towers and the odd enemy fighter quickly descends into boss fights against impossible constructions, battles with drone swarms, and navigational set-pieces straight from a Universal Studios ride.

The demands of Ace Combat 7’s campaign are matched perfectly with its accessible approach to flight simulation, throwing improbable machines and scenarios at you simply because it can. Any veterans of the Tom Clancy's H.A.W.X. games (I never did know what that acronym stood for) know how important that marriage of thematic and mechanical approach is: The pseudo-serious Clancy setting prevented those eponymous Hawx from ever getting too ridiculous, and tedium ensued as a result. There's no similar danger here.

Make it back to base after one of these delirious encounters and you’ll earn some currency to spend on new weapons, plane upgrades, and entirely new aircraft via a huge and elaborate tech tree. The improvements to manoeuvrability are subtle when you upgrade a plane, but weapon additions can make you much more effective in certain missions—plus each new jet speaks to the five-year-old in all of us who finds them impossibly, unspeakably cool. Ace Combat knows this very well, you suspect, as it lingers on shots of them in selection screens before your sortie.

But is there enough variety? It seems ungrateful to even ask when you've just concluded a mission that requires you to navigate collapsing skyscrapers, but—no, there isn't, really. Despite all the bluster, it’s hard to shake the fatigue that comes with your hundredth dogfight or ground attack. The settings change, and sometimes the environment itself poses a hazard, but in the simplest terms the gameplay loop doesn’t evolve beyond aim, lock, fire. That’s as much a genre problem as anything Ace Combat 7 does wrong in particular, and if you’re reading this review you’ve likely already made your peace with arcade flight sims’ eccentricities. Still, that frustration exists.

The negative side of this review has bigger fish to fry, though. Like ten minutes of utterly unengaging opening cutscene, in which we learn about a few fictional nations who’ve been at war for ages and about a big bomb that exploded. And loads of additional cutscenes between missions, which, hand on heart I really did try to follow, but something just happens to my neural pathways after I’ve passed my threshold for narrative nonsense and the words just don’t register anymore. Previous Ace Combats made it their ‘thing’ to bark absurd dialogue at you until it became endearing, and rest assured series fans, that “Just how penal is this penal colony?” line is back and referenced with a knowing smile this time. Despite that, this game appears to want to be taken seriously for large chunks, and it doesn’t have the characterisation—scratch that, enough of a semblance of sense—to merit that.

Let’s not dwell on what’s ultimately a subjective aspect of the game, though. Let’s instead sing Ace Combat 7’s praises for looking great without taxing your PC overly (there’s even a downsampling option, egads!) and for keeping the early '90s arcade flight sim alive, prettier and weirder than ever.

Uncomplicated but gratifying flying, in scenarios of increasing silliness and therefore likeability.